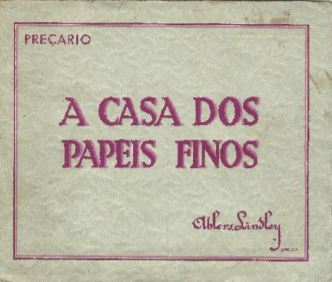 The Lindley group of companies celebrates its 90th anniversary in April 2020.

Its origin dates back to 1930, when Ahlers Lindley, Lda. was established in Lisbon (Portugal) by Rudolf Ahlers and Antonio Lindley with a capital of £400, as English paper importers and distributors, principally from Charles Morgan and Wiggins Teape Ltd . During the two decades that followed, the company grew successfully, despite the death of Ahlers in 1933.

The first diversification of the business came during that period with the acquisition of Tuella Tin Mines Lda., located in the North of Portugal. Several other mining interests were developed in the pre-war years in support of the allied war effort, by supplying raw materials from neutral Portugal, particularly tin and wolfram.

After the second World War, trading activity was diversified to include machinery, metals, and chemical raw materials. It was in 1956 that Ahlers Lindley started supplying harbour equipment. Two steam cranes were supplied to the Portuguese Naval Base, Arsenal do Alfeite, manufactured by Thomas Smith and Sons Ltd., one of which still exists.

In 1966, the second generation of Lindley’s took over management from Lindley’s widow, and a period of rapid expansion followed, which resulted in the building and purchase of premises in Cacém and Porto. Finally, in 1981 the Group purchased the current headquarters, Edifício Mical, in Cascais. This was a large engineering works manufacturing mining and crushing plant,  belonging to Mical, Mecanica Industrial de Cascais, Lda, established in 1951, which the group purchased pushing the total number of employees at more than 200.

In response to the recession of the early 1980’s the group was reorganised and divided into several companies which allowed specialisation in their respective markets and share ownership by their managers. By the 1990’s the group structure was as follows:
• Almovi: Mechanical handling equipment and hydraulic platforms.
• Almec: Industrial compressed air and sandblasting equipment.
• Alchema: Industrial chemicals and plastics.
• Florestal: Forestry and wood processing equipment.
• Alma: Platform and scaffolding hire.
• Lindley: Floating equipment for marinas and harbours. 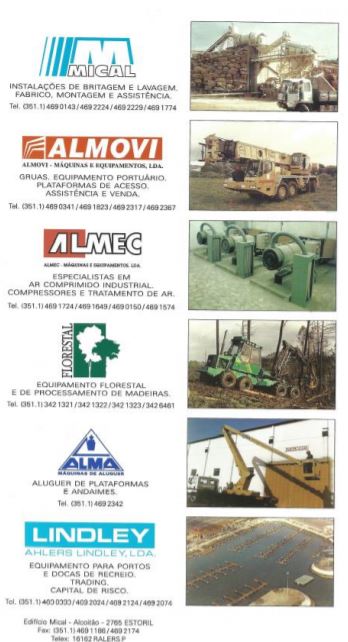 This period, with the entry of the third Lindley generation into the business, saw growth. Firstly, in the mechanical handling area through Almovi, with the distribution of major brands such as Grove and Demag cranes, Simon platforms and Marine
Travelift. Secondly, through Lindley, with its own brands in marinas and marine aids to navigation. This led to the sale of the remaining commercial subsidiaries.

From 2000 onwards consolidation took place, largely in the marine business area. Almovi strengthened its position as a supplier of harbour and industrial handling equipment and expanded its maintenance and service facilities; Lindley developed its own designs and products for marinas and aids to navigation; Mical manufactured for both companies.

The first steps in foreign trade took place after the establishment in 2004 of Almarin SL, in Barcelona, for the distribution of marine aids to navigation in Spain.

In 2011, as the financial crisis hit southern Europe, Almarin and Lindley started operations in South America. Almarin won a contract for the supply and installation of navigation buoys for the Colombian Navy to mark the main harbours on the Colombian coast.

Lindley, after supplying its first marina contracts in Brazil, and taking on further significant contracts, established a subsidiary in Rio de Janeiro in 2015, Lindley BR. This culminated with a major contract to reorganise, supply and install the Marina da Gloria in Rio for the Olympic Games in 2016.

Currently the Lindley group ownership is shared by the Lindley, Arriaga, Vasconcelos Dias, Simões and San Vicente families, and is supported by a team of over 50 professionals, amongst them industry leading experts.

Thanks to this team and the credibility of 90 years of experience, the Grupo Lindley companies continue invest in innovation and renovation whilst maintaining the values of trust and integrity to achieve the mission of providing customers with the most reliable solutions for their projects.

Phoenix Group rise with a strong performance in...