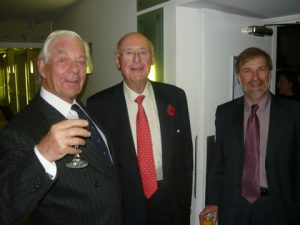 A noticeably high profile gathering of IMIF* members and their guests, some 285 in all, attended the 36th IMIF Annual Dinner at the Radisson Blu Portman Hotel in London on 2nd November 2011. IMIF always holds its Annual Dinner on the first Wednesday in November. After an excellent meal and the Loyal Toasts IMIF Chairman Jim Davis began his latest assessment of the shipping market. He reminded the audience that he had begun his shipping career in 1952, the same year that Her Majesty Queen Elizabeth II ascended the UK throne. The purpose of IMIF had always been to address the problems confronting the international maritime world and to try to bring all the varying groups operating in shipping together to think tangentially in the search forv solutions. ‘It is difficult to be cheerful right now’ he said. I was once nicknamed ‘Scrapping Jim’ when suggesting an obvious solution to overtonnageing but the problem is still there. 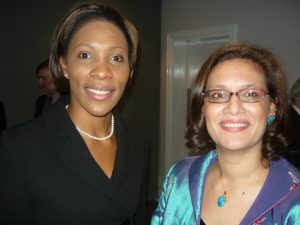 There are still too many ships in all areas of the market and there are too many orders to build identical ships for that same overcrowded market. Another reason to come together is to decide how to deal with piracy. We need to establish proper rules of engagement on how to deal with this handful of criminals who are holding our mighty industry to ransom.
Jim Davis praised the outgoing Secretary-General of the IMO, seated at the Top Table with him, for holding together 170 member states in common cause. This prompted Adm. Thimio Mitropoulos to intervene claiming that his rule for successful healthy living was ‘A speech a day keeps the doctor away!’ He hoped that the maritime industries would support his successor at the IMO, Koji Sekimizu, who was also seated at the Top Table. 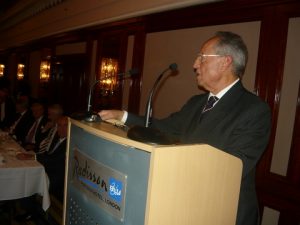 Adm. Mitropoulos recalled the rescue of the trapped Chilean miners who had been greeted individually on their safe return to the surface by the President of Chile himself. ‘Who greets seafarers released from captivity at their home ports?’ he asked. Mr Davis concluded his speech by thanking Ian Bouskill, Secretary of IMIF and Victoria Mott for organising the Dinner so well. He thanked the guests for attending and especially those who had brought other guests and particularly those IMIF members who had taken tables at the Dinner to support it. He then proceeded to recite his current politically incorrect series of ‘jokes’ without which no Dinner chaired by him would be complete before asking the Panamanian Ambassador to draw the winning ticket for the bottle of champagne. 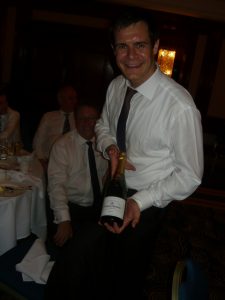 This was greeted with noisy cheers from the winner’s table. He then referred to the series of envelopes in the centre of each table, explaining that they were there to solicit donations for the ‘Sailors’ Society’  and he hoped that the guests would respond generously to a noble cause.
And that was the final part of the 36th IMIF Annual Dinner.  The 37th IMIF Annual Dinner is booked to take place on Wednesday 7th November 2012. Try not to miss it!

Ship-shape, the buzz word to save Greece et al