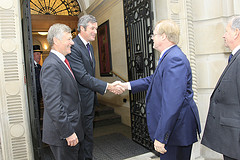 Newly elected Lord Mayor of London David Wooton highlighted the £26bn contribution made by maritime businesses to the UK economy during a visit to London’s Baltic Exchange  last Wednesday.
The visit underlines the diverse range of business activity in the Square Mile. The Baltic Exchange itself provides independent freight market information and a code of conduct for shipbroking activity for a membership which handles the seaborne transportation of most of the world’s commodities including grain, oil, coal and iron ore.

In the first visit of his mayoralty, the Lord Mayor said: “The UK has a uniquely strong maritime services sector built on 300 plus years of experience. It is one of the UK’s biggest earners, delivering over £26bn to the UK economy and employs half-a-million people. It could play an even greater role in the future assisting the Government objective of reducing debt.”

He noted that during his term in office, one of his priorities would be ensuring that the City and its institutions are fit for the future. London today is the world’s foremost chartering, financial, insurance and legal centre for the global maritime industry thanks to the presence of international shipowners, Lloyd’s of London, the Admiralty and Commercial Courts and the UN’s International Maritime Organization.  He commended the Baltic Exchange’s work saying: “The Baltic’s specialist knowledge and experience is vital in providing a strong and stable environment in the UK, helping us to retain international shipping investors and attract new business.”

Baltic Exchange Chairman Mark Jackson called on the Lord Mayor to help communicate the UK’s leadership position within the global maritime industry to the general public and said that the Baltic Exchange would work with the Lord Mayor to ensure that central government policy towards the sector was supportive, highlighting the tonnage tax, non-dom tax regime and the implementation of MiFID 2 as particular areas of interest.

Lloyd’s: At the heart of insurance