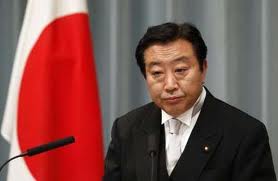 – The following comes from the WEF info page and we find same very interesting as the Far East has grave concerns that the Eurozone must stay “intact”,    and we invite your comments for a second World crisis debate:

Davos-Klosters, Switzerland, 28 January 2012 – Interviewed by videolink from Tokyo, Japanese Prime Minister Yoshihiko Noda told a panel discussion on risk, hosted by NHK at the World Economic Forum Annual Meeting in Davos-Klosters, that Japan sees Europe’s debt crisis as the major risk on the current horizon. Noda said that Japan is already working with South Korea and India to reduce the risk of the crisis spreading to Asia, and the country is ready to help out in Europe. “Japan stands ready to support the Eurozone as much as possible, ” he said.

Turning to the situation in Japan, Noda said that recovery from last year’s earthquake, tsunami and nuclear meltdown is already well under way, and that it is time for investors to look for opportunities in Japan. The Prime Minister said he is aware that international markets are watching Japan closely. The country’s current objectives are sustainable growth with fiscal discipline, which is likely to involve increased taxes as well as budget cuts, while maintaining its system of social security.

Noda acknowledged that Japan is still experiencing a shortage of electric power with the loss of the Fukushima nuclear reactor, but conservation measures and a growing readiness of the public not to waste electricity has managed to compensate for the shortfall. Last year’s disasters helped spark a new spirit of innovation and Japan is experiencing a renewed interest in renewable energy, storage batteries and smart grids.

Concerning Japan’s domestic politics, Noda promised more decisive leadership and a breakaway from the indecisive politics of the past.