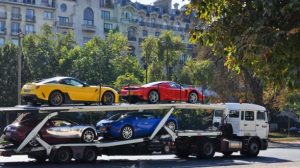 We have brought you in the past some views and points on corruption; herebelow is what Huguette Labelle says on fighting corruption; let wak up and start fighting against this business pandemic!

We are often asked to say who is most or least corrupt? Who is doing the most about it? Is the world more corrupt than in the past?

I wish we knew that. What we can say is which countries have very good systems in place to make corruption much harder to get away with. The countries at the top of Transparency International’s Corruption Perceptions Index are characterised by a transparent, accountable civil service. Citizens can ask to see accounts and decisions.

If someone does something inappropriate, there is a high chance that a watchdog, journalist or citizen will ask about it.

This benefits government, business and citizens. That is why transparency and the drive to get the right laws in place to fight corruption (and enforce them) must be high on the World Economic Forum agenda.

In recent years, governments have taken more action against companies for corruption, with more foreign bribery cases in the US, stronger anti-bribery law in the UK and new laws in emerging economies.

That is a sign that more is being done to tackle corruption than before. However, the capacity to move illicit funds – both the source and proceeds of corruption – around the world is stronger too.

This means that we need even greater transparency in the global economy. Companies should disclose the money which they pay to, as mandated in the US and soon in the EU too. The case of Libya, where few ordinary people seem to have benefitted from the country’s oil wealth, showed how destabilising opacity can be.

With people taking to the streets, and the internet, to hold leaders to account in the Arab world, Russia, India and elsewhere, with leaders taking strong stands against corruption in their governments, we might be entering an era where leaders work harder to earn the trust of their citizens.

Can we fight corruption? Absolutely.

Any company can follow the lead of the Group of 20 and make sure there that the law provides protection for people who blow the whistle on corruption, from Germany to Guatemala.

Any person can report corruption. More than 100, 000 have visited Transparency International offices in recent years to do just that: students in Ghana, a shopkeeper in Azerbaijan, even remote communities in Africa.

In France, a court case brought by Transparency International France has led to the seizure of 12 sports cars worth millions of dollars belonging to an African head of state – the tip of the iceberg when it comes to stolen assets.

Everyone – the businessman, the politician, the citizen, the mother – can do something about corruption. The first step is to say no.

*Huguette Labelle is chair of Transparency International, and a member of World Economic Forum Global Agenda Councils on Mining & Metals and on Governance, as well as the NGO Advsiory Group to the Forum.

Housing finance and capital markets are pillars of...