An improved treaty but more needed on growth 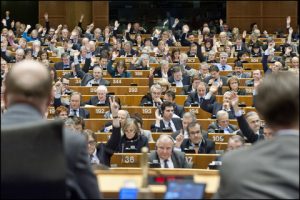 Would have been better to reach agreement under normal EU law

The newly-agreed governance treaty was largely unnecessary to emerge from the crisis. It must be made consistent with the economic governance “six pack”, and backed by immediate measures to address the Eurozone’s short-term constraints, said Parliament in a resolution passed on Thursday. MEPs were nonetheless pleased that the new treaty includes many of the proposals made by their representatives.

The resolution spelling out the EP’s priorities was passed with 443 votes in favour, 124 against and 75 abstentions. It followed Wednesday’s debate with European Council President Herman Van Rompuy and Commission President José Manuel Barroso on the informal summit outcome, a debate dominated by calls from across most of the political spectrum for action to restore growth and reduce unemployment.

Better, but still a pity

The resolution says that the final treaty text agreed by heads of state is a significant improvement on earlier versions and that it takes account MEPs’ insistence on the need to focus more on growth as well as fiscal restraint and to work within the normal EU system wherever possible. The resolution also welcomes that the risk of a two speed EU was lessened and that there will be more parliamentary oversight than initially envisioned. Nonetheless, it would have been better to have reached an agreement under normal EU law, stresses the resolution, reiterating an argument constantly aired by MEPs since the idea of a separate treaty was first mooted.

The resolution insists that economic recovery requires specific measures to promote solidarity, employment and growth. A first measure would be rapidly to establish a redemption fund based on the proposal by the economic advisers to the German government. Others would be to introduce project bonds, and prepare rapidly to introduce stability bonds and a financial transaction tax at European level.

The European Parliament has been fully involved in the treaty drafting working group through its four representatives, Elmar Brok (EPP, DE), Roberto Gualtieri (S&D, IT), Guy Verhofstadt (ALDE, BE) and Daniel Cohn-Bendit (Greens/EFA, FR). The working group worked through December and January to present the heads of state with a draft treaty text at the 30 January summit. The text, as agreed by the heads of state, will now go through the normal ratification processes in the Member States having signed up to it.

UN Secretary-General speaks out on seafarers

Migration in Greece: An Endless Despair