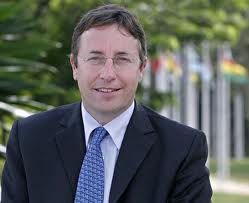 Dramatic improvements in the way the world manages its precious soils will be key to food, water and climate security in the 21st century

Dramatic improvements in the way the world manages its precious soils will be key to food, water and climate security in the 21st century.

According to the United Nations Environment Programme’s (UNEP) Year Book 2012, 24 per cent of the global land area has already suffered declines in health and productivity over the past quarter century as a result of unsustainable land-use.

It highlights assessments indicating that some kinds of conventional and intensive agriculture are triggering soil erosion rates some 100 times greater than the rates at which nature can form soil in the first place.

By 2030, without changes in the way land is managed, over 20 per cent of terrestrial habitats such as forests, peatlands and grasslands in developing countries alone could be converted to cropland?aggravating losses of vital ecosystem services and biodiversity.

There could also be profound implications for climate change. Soils contain huge quantities of carbon in the form of organic matter that in turn binds the nutrients needed for plant growth and allows rainfall to penetrate into underground aquifers.

Since the 19th century, an estimated 60 per cent of the carbon stored in soils and vegetation has been lost as a result of land use changes, such as, clearing land for agriculture and cities.

By some estimates, the top one metre of the world’s soils store around 2, 200 Gigatonnes (Gt or billion tonnes) of carbon?three times the current level held in the atmosphere.

If existing patterns of land management continue, increasing amounts of this carbon could be released to the atmosphere, aggravating global warming linked to the burning of fossil fuels.

The UNEP Year Book 2012, launched on the eve of the 12th Special Session of the UNEP Governing Council/Global Ministerial Environment Forum, points to the world’s peatlands as an area of special concern.

The draining of super carbon-rich peatlands is currently producing more than 2 Gt of CO2 emissions annually?equal to around six per cent of man-made greenhouse gas emissions.

Today the degradation of peatlands is happening at a rate 20 times greater than the rate at which the peat, and thus the carbon, is accumulated.

The Year Book, launched four months in advance of the Rio+20 Summit, highlights another issue of emerging global concern?the challenges of decommissioning the growing numbers of end-of-life nuclear power reactors.

There are plans to close up to 80 civilian nuclear power reactors in the next ten years, as the first generations of these reactors reach the end of their original design lives.

As of January 2012, 138 civilian nuclear power reactors had been shut down in 19 countries, including 28 in the United States, 27 in the United Kingdom, 27 in Germany, 12 in France, 9 in Japan and 5 in the Russian Federation. Decommissioning has only been completed for 17 of them, so far.

Countries have also been reviewing their nuclear programmes following the tragedy of the tsunami that struck Fukushima and its nearby nuclear power plant in Japan in 2011.

Meanwhile, an increasing number of developing countries have built or are considering building nuclear power plants which could mean more old nuclear plant closures in the future, at the end of their lives.

In the United States, the average cost of decommissioning a nuclear power reactor is by some estimates around 10 to 15 per cent of the initial capital cost, while in France, in the case of the Brennilis reactor, it was estimated at around 60 per cent of the reactor’s initial cost, a percentage that is still on the rise.

“Superficially they may seem separate and unconnected issues, but both go to the heart of several fundamental questions: how the world will feed and fuel itself while combating climate change and handling hazardous wastes?” he added.

“The thin skin of soil on the Earth’s surface is often one of those forgotten ecosystems but it is among the most important to the future survival of humanity. The Year Book cites many options for improved, sustainable management such as no-till policies to ones that can assist in productive agriculture without draining peatlands, “ said Mr Steiner.

“The Year Book also spotlights the options and the complexities of decommissioning nuclear power plants when they reach the end of their lives, focusing on an issue for which there remains sparse information but perhaps where more in depth analysis is needed when making energy choices today: namely, the price of making these plants and associated radioactive materials safe for current and future generations, “ he added.

The Benefits of Soil Carbon

The Year Book encourages the development of universally agreed and reproducible field and laboratory methods for measuring, reporting and verifying changes of soil carbon over time.

Carbon stocks can be enhanced by ensuring that carbon inputs to the soil are greater than carbon losses. For example:

Across the globe, there are examples of how multiple benefits can be delivered through effective management of soil carbon:

In Kenya, the World Bank’s BioCarbon Fund is providing the Kenya Agricultural Carbon Project with US $350, 000 to pay smallholder farmers to improve their agricultural practices, to increase both food security and soil carbon sequestration.

From Dakar to Djibouti, the Great Green Wall initiative is a massive afforestation project to create a 15 km wide strip of trees and other vegetation along a 7000 km transect to improve carbon sequestration, stabilize soils and conserve soil moisture amongst others.

In China, similar approaches are being monitored to assess whether land degradation in arid areas can be reversed.

In Brazil, changes in crop production practices have been found to have significant effects on soil carbon stocks. Conversion to no-till techniques in soybean, maize and related crop rotation systems resulted in a sequestration rate of 0.41 tonnes soil organic carbon per hectare per year.

In Argentina, significant increases in soil carbon stocks have also been achieved, where farmers changed to no-till systems, along with enhanced benefits in water retention, infiltration and erosion prevention.

Each approach requires early and clear decisions regarding the timing of the closure of facilities and intended future use of the site. Each also requires adequate funding, trained personnel, regulatory oversight and waste storage and disposal facilities.