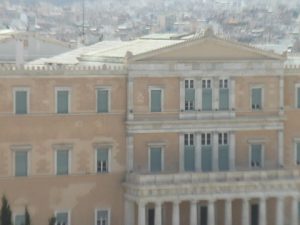 Efforts to reform and rebuild Greece’s economy in future will be undermined because the country’s government, businesses and civil servants not only fail to stop corruption but actively participate in it.

The warning comes today from Transparency International Greece’s first ever assessment of the ability of important national institutions to fight corruption. The report, the first “National Integrity System assessment” in Greece, exposes the corruption problems that underlie the Greek crisis. 98 per cent of Greeks told an EU corruption survey published this month that corruption was a major problem in their country, with 88 per cent saying that corruption is part of Greek business culture.

The report calls for several institutional reforms to put an end to impunity for corruption in business, government and daily life, including the creation of a single anti-corruption body. “We all know about the debt crisis, but Greece is also suffering a crisis of values. It has the right laws in place but does little to enforce them.

The law is being violated, the illegal is being legalized, and the international commitments to fight corruption are being ignored. The laws are there, and institutions already have teeth – they just need to bite, ” said Costas Bakouris, President of TI-Greece, at the launch of the NIS report.

While Greece has many laws in place to fight corruption, the report warns that they are not being enforced, and that in many cases other laws effectively condone corruption:

The report assessed 12 Greek institutions (“pillars”) – including the executive, legislature, political parties, and civil society – in terms of their effectiveness in preventing and combating corruption. The private sector, judiciary and public sectors were identified as most problematic, the Ombudsman as the least, thanks to sound legal framework and effective operation in practice.

“Political leaders must realize that this crisis is a unique opportunity to redefine lost values and re-establish national institutions.

Strong political will and citizens’ engagement are necessary, so that a new slogan “Live with transparency in Greece” will be created”, concluded Costas Bakouris.

Note: The NIS assessment has been carried out between March 2011 and January 2012, within the framework of the European National Integrity System Programme, which is being implemented in 26 European countries. More details at: http://media.transparency.org/nis/cogs/?Country=ge •Download the executive summary Media contact(s):  Marina Nasika  + 30 69 345 80 478 mnasika@yahoo.gr

UN Secretary-General speaks out on seafarers