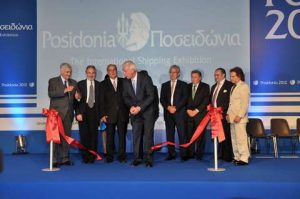 The world's biggest shipping show is on!

The Greek Prime Minister Panagiotis Pikramenos presided yesterday at 18;15 hrs, Monday the 4th of June over the official opening ceremony of the international shipping exhibition Posidonia 2012. Many government officials, foreign diplomats and representatives of Greek and international maritime organizations attended the inauguration ceremony of Posidonia, the premier event of the global shipping industry.

Awaiting the opening: The Greek Prime Minister Panagiotis Pikramenos with Ioannis Stournaras the Minister for Shipping, Development and Competitiveness. At the back row, Dr. Thanos Pallis, SC of the MSDC and Goerge Anomeritis, President of the Piraeus Port Authority

In his address, the Greek Premier said: “The participation of so many exhibitors at this year’s Posidonia, which will attract a significant number of decision makers from the global financial and shipping communities, is a vote of confidence to the Greek shipping community and the prospects of the Greek economy at large. It must be interpreted as an optimistic message for all Greek people. During these moments, we must highlight and promote the bright examples of the business men and women who strive and succeed in the market economy creating value and jobs. The shipping sector flourishes thanks to its solid foundations established by private entrepreneurial initiatives and operating on principles of free market economy demonstrating its resilience and competitiveness for decades.”

He went on to add: “The Greek state must support and respect the significant potential of the sector which has established Greece at the summit of the global maritime industry. I also call upon the Greek shipowners to support our country in these difficult times. You have done so in the past, but today, more than ever before, Greece needs new investments, new job opportunities and more liquidity.” 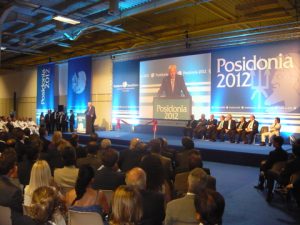 The Prime Minister of Greece delivering his speech

The Prime Minister concluded his speech with a reference to the role of the cruise industry. “The cruise sector today contributes to the port of Piraeus alone revenues of more than Euro 360 million a year. If we take the right decisions and make the right moves we could even achieve annual revenues of Euro 700 million by doubling the total number of passengers using the port’s cruise terminal to 5 million per year by 2016. This should be our strategic goal for the economic development of Piraeus; Greece’s biggest sea port to maintain its leading position as the biggest port in the entire Mediterranean.” 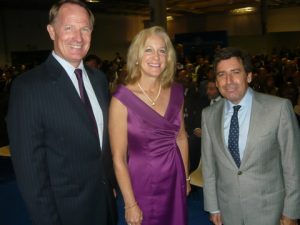 More than 17, 000 executives from the Greek and international shipping communities are expected to visit the state-of-the-art Metropolitan Expo venue during the five-day event which occupies 45, 000 square metres of floor space setting a new participation record with 1, 870 exhibitors from 87 countries.

The projected increase is buoyed by the stronger participation of traditional shipbuilding nations and engine and equipment exporters all vying for a bigger slice of newbuilding orders placed by Greek shipowners, as well as many companies servicing this global fleet. 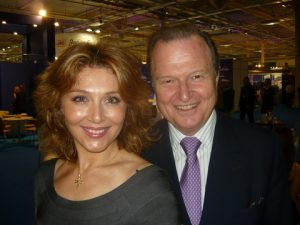 Zoe and George A. Tsavliris at the exhibition hall

The continuous strong interest of the global maritime community in Greece is mainly due to a constant flow of newbuilding orders by Greek shipowners who collectively operate the largest commercial fleet in the world, comprising 3, 325 vessels and a combined capacity of 227 million dwt. Last year alone, Greek shipowners invested a total of $US 8.5 billion in newbuilding orders. It is this might that global ship building powers such as China find appealing, leading to a 30 per cent increase of its national pavilion at this year’s Posidonia. 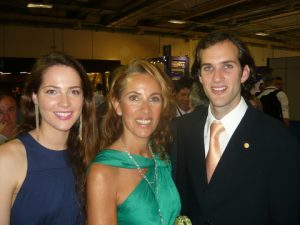 The Tsavliris' in full force; here Milena A. Tsavliris flanked by two of her three children, Natalia on he lft and Alexander on her right

Posidonia 2012 will not only showcase new technologies, products and services, but also provide a critical insight into the key issues and recent developments affecting world trade and sea transportation as well as on the cruise industry and the contribution of sea tourism for the Greek economy, on the back of recent developments which have ushered the country to a post-cabotage era.

The Minister of Development, Competitiveness and Shipping, Mr. Ioannis Stournaras, stated: “Given the significant role it plays in the global sea transportation sector, the progress and growth of Greek shipping is of vital national importance. The sector’s size and contribution to the national economy is significant in job creation and new investments. These challenging times remind us that Greek shipping’s resilience and global competitiveness can be crucial in the nation’s quest for a viable exit from the economic and social crisis. 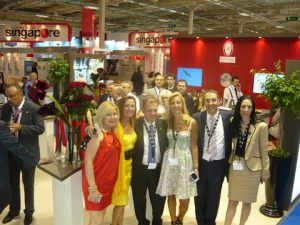 “According to the findings of an unpublished survey conducted by the Foundation for Economc and Industrial Research, if Greek shipowners congregated the entirety of their business activities in Greece, our nation could create incremental revenues in excess of Euro 26 billion – compared to Euro 10 billion today. Simultaneously, through a raft of direct and indirect business activities that would emerge as a result, unemployment would decline by 35 per cent.

“We must develop initiatives supported by a modern and stable administrative body which would leverage the creation of an independent Ministry of Mercantile Marine with the mission to effectively serve the interests of the national economy.

The Chairman of Posidonia Coordinating Committee, Mr. Ioannis Lyras, mentioned: “Hellenic shipping is the healthiest national economic activity and like Posidonia the thoroughbred achievement of the private and proprietary entrepreneurial model of business. This model is characterized by flexibility, adaptability, dynamism and tenacity where traditional values of industriousness, resourcefulness, commitment and responsibility do not have to be mandated bureaucratically. It is the right hand of world trade and as in the past, despite its current problems, it will be a vehicle for exiting the current world and national economic crises. Shipping is not part of the problem. We are part of the solution.”

During his welcome speech, the President of the Union of Greek Shipowners, Mr. Theodore Veniamis, mentioned: “Apart from being a Maritime Exhibition of international repute, the success of Posidonia demonstrates the robustness and dynamism of the shipping sector as the dominant vehicle of world trade which will once again be a major contributor to the economic recovery we all need and are urgently awaiting. Greece with its great maritime tradition is able to confirm this.”

To sum up, Mr. Themistocles Vokos, Chairman of the Posidonia Exhibitions highlighted that: “Greece stands only to benefit from the achievements and success of its seafaring people who managed to gradually become leading shipowners while operating in a strongly competitive international environment without the support of governmental grants. We salute our 1.800 exhibitors and more than 17, 000 visitors from nearly 90 countries who have come to Greece from every corner of the world to take part in this weeklong celebration of business activities.”

Note: The Prime Minister’s and Minister’s of Development, Competitiveness and Shipping speeches where in Greek and the above can be consindered as free translations.

Note B:  More on the opening with a special video and extra photos later on.