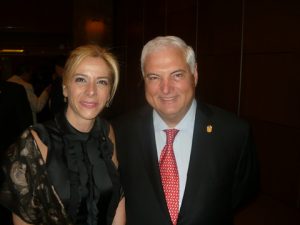 President Ricardo Martinelli lead once again the Panamanian delegation and Panama’s shipping cluster in Greece for the 2012 Posidonia. It was two year ago when he made headlines for joining his nation’s shipping teams in Greece for the respective Posidonia, creating another image, unknown in the past as rarely one can see a nation’s President with hands on business!  He was everywhere during his short stay; at the exhibition and his country’s stand, in business and other meetings and here at a full house at Athens’ Inter Continental Hotel last Wednesday! John Faraclas witnessed the great event: 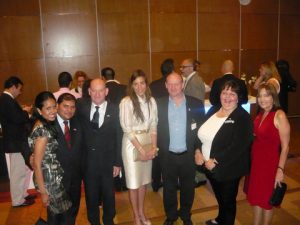 fourth from the left, H.E. Ana Irene Delgado. the Panamanian Ambassadress in London with a group from her office and other guests which inlude Maria Dixon (sixth form the left) the President of WISTA-UK

The Ambassadress and Consul General of Panama Mrs. Felicia Dushka Papadimitriou and her Embassy secretariat organised yet again another great event following the successful one she organised two years ago at the Divani Apollon Palace in Athens’ Vouliagmeni resort.

A great variety of international cuisine including an exotic menu …coupled with exotic drinks, live traditional live Panamanian music leading to great fun and dance the ingredients of a great night – the Panamanian are “notoriusoly” known for this… 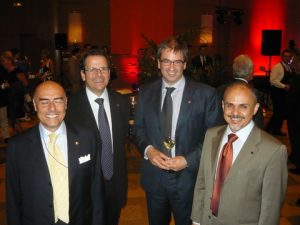 Who wasn’t there: The very active Panamanian Ambassadress in London Ana Irene Delgado*, members of the Panama Maritime Authority, the Panama Canal’s executives, shipowners, shipmanagers, technical consultants, you name it where there. Spotted amongst others Irene S. Daifas, Ugo Salerno, head of RINA with Spyros Zolotas of RINAs’ Greece Office, Paul and Maria Dixon from ISM Solution in London and number one Panama supporters and many many of others. 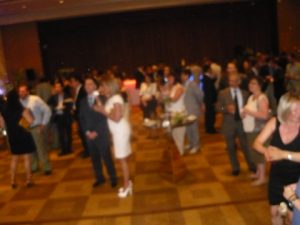 The new Panama Canal opens on schedule in 2014 and we all hope it will further contribute to Panama’s development; competitiveness as well as it will improve the world trade and tourism. Last but not least the Panama Flag** and Registry are by far the world’s largest, honoured mainly by the USA, Greece, Italy and many other shipping nations’ shipowners! Many Greeks over one hundred years now live and work in Panama and Hellenism there holds an important stake in Panama’s business and social life. 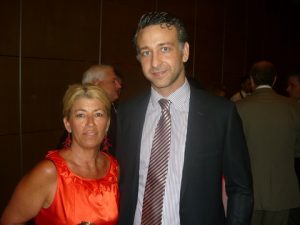 **coincidentally the first ship I ever sailed on and circumvent the globe as a young boy, the s/s Santa Despo was flying the Panamanian Flag!