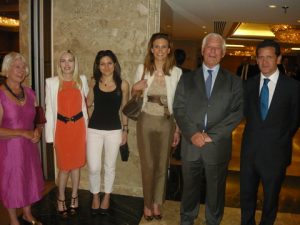 Last Wednesday on the occasion of Posidonia 2012, H.E the Japanese Ambassador and Mrs. Hiroshi Toda jointly with Mr.Takao Motoyama, president of the Japanese Ship Exporters’ Association, entertained over 700 guests at the main ball room of Athens’ InterContinental Hotel. John Faraclas and an allaboutshipping.co.uk team attended too and report:

Japan Ship Exporters’ Association is one of the world’s most powerful bodies, given that  overall Japan is the leader in Shipbuilding and Equipment world for over the last fifty years! The entire world, but more specifically the Korean, Taiwanese and Chinese Shipbuilding Industries  have received all the best the Japanese Shipbuilding and Marine Engineering  Industry has marvelled over the years. Worth mentioning for example the Korean boom in the 70’s which started with hulls being built in Korea and then equipment was emanating mainly from Japanese companies, and then slowly slowly creating join ventures or beginning their own marine equipment industry leading to their success too.  Same applies for China! A lot of R & D world-wide in the shipbuilding and marine equipment field comes from Japan and that’s a fact! Japan, Korea and China today call the shots in the shipbuilding, shiprepair and conversion industries, a harsh observation but that’s the truth! If Greece and Europe had other leaders, half of what today is being built in the Far East and the above mentioned countries, could have been done in Europe and in Greece’s shipyards! Did I hear you say Japanese ship-finance too…? (this bit of reporting comes from discussions held during the reception). 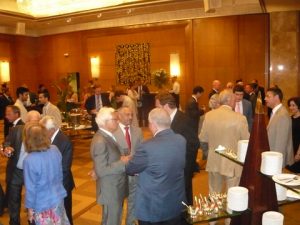 Evangelos Angelakos and his son Stephanos talking with other guests at centre stage...

Worth mentioning too the quick recovery of the Japanese Nation after the unfortunate Fuhushima events following a natural disaster, that of an earthquake just over a year ago and its aftermath; congratulations to all and let us see this as an example for tackling  similar and other asymmetrical events and disasters of any nature.

We spotted many Greek Shipowners, but also shipowners from all over the world visiting Posidonia attending the event and rumours have it that, despite the present state of the market, new orders are placed in Japanese shipyards.

We missed the line-up, but had the chance to meet the Japanese Ambassador and his very down-to-earth wife Ritsuko Toda, the Australian Ambassadress H.E. Mrs Jenny Bloomfield, representing an up and coming new shipping power which includes great exportable shipping mineral resources and has a great future in the ports and logistics chain, as well as the iconic shipping man and friend Peter Vroon and his wife and had an impromptu photocall! A great honour to see Peter Vroon in Greece for Posidonia and attending so many events! A traditional shipping man whose shipping family business is over a century old with his multi different shipping markets which  include reefer vessels, livestock carriers, offshore support  vessels, dry cargo ships, container carriers, tankers and car carriers! A great variety of food with sushi and other traditional Japanese gastronomic remedies making the event unforgettable!

The Angellakos’ were there too leading the group of prominent shipowners, Dimitris Dalakouras from Conbulk Shipping S.A.,  many technical consultants, the NKK too had a strong presence, many bankers and journalists, needless to say the one-hundred plus strong executives from the various companies exhibiting at Posidonia! Sho deska!

Tranquillity and warmness on the lawn