Tranquillity and warmness on the lawn 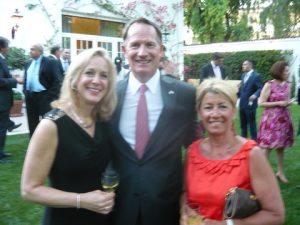 H.E. The U.S. Ambassador Daniel Smith with his wife Diane and Anny Zade on the right

This mid-week reception of the American Ambassador at his residence in Athens was one of the best ever we’ve attended over the last forty years of Posidonia receptions! In the magnificent gardens of his residence …coupled with a nice breeze, exceptional for that specifically hot day, nice drinks and dips, H.E. Daniel Smith, his wife Diane and embassy officials entertained us with traditional warmth and openness: a feel at home style!  John Faraclas was there with his cameras…

Over one hundred and fifty guests from all sectors of the shipping spectrum – creating a mini maritime cluster, together with the social, political and military sectors where entertained on the lawn where they also held interesting exchanges – the best networking ever held! 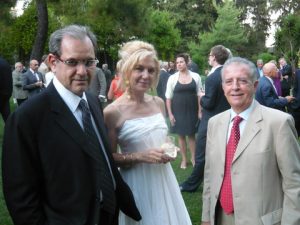 The trust vested from both the world’s superpower and the masters of the seven seas is unique, tested through time and can be further enhanced!

We spotted General (rt) (Fragoulis Fragos, the interim Greek Minister of Defence, Tatiana  Karapanagioti, interim Greek Ministress for Culture and Tourism, Ioannis Stournaras interim Minister for Shipping, Development and Competitiveness – the latter two having a good long discussion… obviously weighing the fact that these two ministries are Greece’s best performers and their co-operation particularly in the field of maritime tourism can work miracles subject the appropriate organisation takes place…from last night, of course and as we are amidst the tourist season, irrespective of the length of their governmental participation, their decisions and co-operation are more than vital given the state Greece stands at this moment.* Admiral (HN) Elliniades was there too, as well as Chartworld’s and Propeller Club’s president Anthony D. Faraklas,  Navigator’s Managing Director Danae Bezantakos,  PPA’s Stavros Hatzakos, Chandris’ Marcos Foros – an important member too of the International Propeller Club, Banker and Financial expert Debbie Forou-Tsirozidou  – vice president of the Propeller Club too, Kaminco’s Sotiris  Kaminis, Stephanos Kostopoulos, Diana’s CEO Simon Palios, the iconic Andreas Potamianos, Dynacom’s George Prokopiou, Prof. Sotiris Theophanis – former head of the PPA,   Theodore Veniamis head of Golden Union and president of the Union of Greek Shipowners,   Yachtsman Terry Tsafos, Themis Vokos – Mr. Posidonia,   Manoli Vordonis – just retired from Thenamaris, but has a lot yet to offer,   as well as members from the US military mission,

We also met the Deputy Chief of Mission Virginia Bennett, the Counselor for Economic Affairs and good friend from the past Paul Malik, US mission in Greece. Last but not least, our Chiot compatriot Irene Ralli, Commercial Specialist from the U.S. Commercial Service was the first to greet us and the last to say good-bye!

Greece and the United States of America have long history and cooperation – shipping is the leading nucleus of this special relationship that few have understood or even known how strong, mutual, trustful and projected to last is: Greeks have “conquered” America centuries ago, Greeks over the last 200 years lead the American Society in all posts – academia, business, science, health, politics to mention but a few;  Greeks continue to call the shots in all aspects of the shipping industry and it is in Wall Street today where the brave Greek Masters of the Seven Seas are amongst its best listed companies in NYSE and Nasdaq! 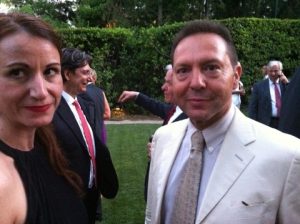 *Soon viewers can read a special on Shipping and Tourism on Greece.