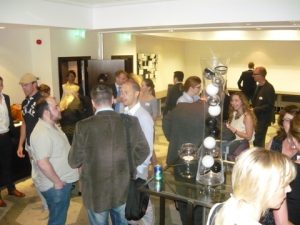 This good-bye summer drinks and dips event last Thursday evening at the Hilton Olympia Hotel, could have easily won any networking prize! Members from the Chamber of Commerce from Denmark, Finland and Norway meet the last Thursday of each month in a bar, hotel or restaurant somewhere in London  for their networking event to enhance their business.  John Faraclas was there for the soft-drinks…

This time, more than 200 gathered in a very lively atmosphere at the Bradford Bar at the Hilton Olympia in West London for over two hours on a down to earth networking which does pay dividends! The Corporate and individual members come from sectors of  business and this time guests from over fifteen different countries took part; a great success! 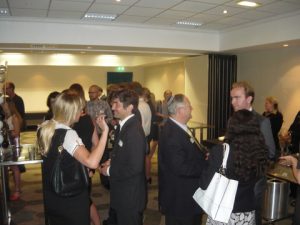 Greeted by the joint secretariat’s Line von Erpecom Kleldner – Norwegian British Chamber of Commerce was given a full set of the participants and companies involved, including many shipping  finance, communications and legal conglomerates, such as  The Maersk company and The Moller Centre, Danfoss UK, Danske Bank, Grundfoss Pumps A/S,   KPMG,   Nordea, Inchcape Shipping Services, E.G Arghyrakis and Co.,  Davenport Lyons, Berwin, Leighton Paisner and many others. I had interesting networking talks with Litta Ronne Larsen from Vinspot.dk, Birgit Kasak from UBS, Karen Finnegan from Paramount Pictures  and Hetta Paarte from Focus Features, Ingrid Timmermann from SQ-Mile Systems, Communications Miia Heiskanen and towering Iris Heionen, whilst the final networking encounter was with Kim Darragon and  Cecilia Gonzalez from the Chambre de Commerce Francaise de Grande Bretagne; excellent!

Hopefully after the summer vacation there might be  a shipping conference/event instigated by the Norwegian British Chamber of Commerce which in the past, 2008, organised one on the credit crunch effects and other shipping and energy issues. Watch this space – skol!