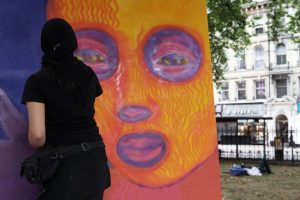 Urban change and its speed never ceases to amaze. Just think, at the beginning of the 20th century, Vienna was the world’s fifth largest city. Its population of 2m then was consistent with its role as the hub of empire; today there are somewhat fewer people, to be precise 1.7m. The metropolis boasted magnificent art nouveau buildings alongside historic palaces. The centre of intellectual life had moved from the residences of aristocracy, to coffee houses and salons. 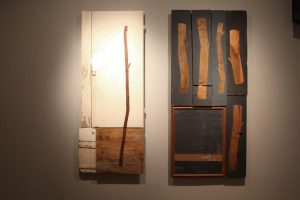 As the trade-conscious bourgeoisie took over from the nobility, the artist Gustav Klimt (1862 –1918) was on hand to depict the new spirit of adventure and optimism, sensuously entwined in art nouveau and the Secession movement: what has been summed up as a golden age for art, music, literature and Freud’s psychoanalysis. 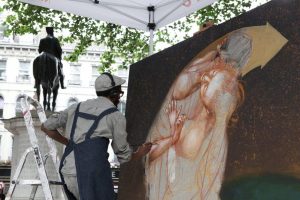 Klimt’s painting The Kiss still dazzles with its gold-drenched daring, however many times it is seen or appropriated for commercial projects. He was in demand to paint murals in large buildings on the Viennese boulevard Ringstraße, and that very public aspect of his art found an echo this August in London’s Grosvenor Gardens, when nine leading street artists produced Klimt-inspired works on Klimt-style large square canvases, watched by curious passers-by.

The completed works have been transported for display in the Lazarides Gallery in Rathbone Place, off London’s Oxford Street, in an exhibition entitled Klimt Illustrated. The exhibition is free to the public until September 1, from Tuesday to Saturday 11am – 7pm. Founded by Steve Lazarides, the gallery has (as did the Secession movement in Vienna) provided a platform for unconventional young artists, in the recent past from Banksy onwards.

Norbert Kettner, chief executive of the Vienna Tourist Board, has led a big campaign to honour his city’s huge Klimt legacy, and was in London at the opening of the show.

London has very little of Klimt’s output in its galleries, so the decision by the tourist board to share a little of the celebration of the 150th birthday of the great man is welcome.  Of course no-one can compete in the Klimt stakes with the Austrian capital, which is marking the year with a series of special events under the banner Gustav Klimt and the birth of Modernism in Vienna, including no fewer than 10 exhibitions. 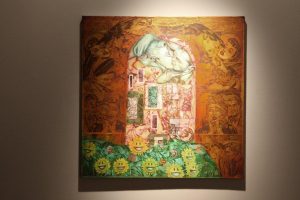 Klimt delighted in depicting (and as a result of many affairs in being highly familiar with) the female body. Mauritius-born street artist Mode 2 (anonymity being a badge of many street artists, as their wall art often skirts the laws on private and public property), reveals a similar illustrative passion in his work – his website biography says: “You may have noticed that I’m also generally obsessed by the female figure, which I’ve always enjoyed drawing, mostly from my own imagination.” Significantly, Mode 2’s contribution to the current show is the one most directly based on the famed Kiss, extending it in a way the master would surely have approved.

Klimt is reported to have painted some of his landscapes using a telescope; one of the artists in the London show, Marlene Hausegger of Austria has strikingly grafted a telescope into her painted tribute to Klimt, but she started from a gold-layered landscape rather than from the optical instrument.

Self-taught artist Know Hope who says that Klimt has become more than a household name to enter a certain type of folklore, is an American Israeli, who got his work to the exhibition only just in time. He started his piece in Tel Aviv and air-freighted it to London, but it was stuck in Customs until the last minute.

There is real gold in the original paintings. In 2006, his portrait of Adele Bloch-Bauer, wife of a sugar magnate, was bought by the Neue Galerie New York for a reported $135m.

Other artists in the Lazarides show are Lucy McLauchlan, Vhils, Ron English, Christian Eisenberger (the “new Viennese actionist” who is said to have once completed 50 paintings in one day), Bastardilla, and Shepard Fairey.