A ready definition for a serving marine is a ‘sea soldier, ’ and these days the profession is generally revered for its members’ daring and devotion to duty. It was not ever thus.  ‘Marines’ at one time was the name given by ordinary seafarers to empty bottles, because such objects were viewed by them as useless.

This example of the constant dualism of the English language has been celebrated for well over a century in succeeding editions of the great reference work, Brewer’s Dictionary of Phrase and Fable. The Rev Ebenezer Cobham Brewer (no relation, as far as is known, to this reviewer) was born in 1810, the son of a Norwich schoolmaster, and he wrote some 40 general knowledge compendia In a kind of 19th century one-man version of the internet. 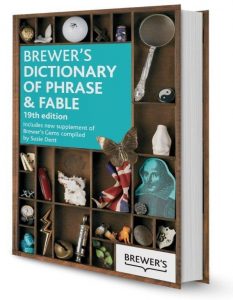 Now comes a weighty 19th edition of Brewer’s, edited in lively fashion by etymologist Susie Dent, the resident word expert on Countdown, a Channel Four television programme, and who writes a weekly column, Dictionary Corner, for the Radio Times. She is the president of The Johnson Society which celebrates the life and times of Samuel Johnson.

As has been the case since first being published in 1870, the tome – now 1, 536 pages long – is full of surprises, of entertainment potential, and more importantly, of erudition. It swings through the peculiarities of language, culture, myth and legend. Tell all this to the marines (this expression came about because Charles II tested unlikely reports on the men of his maritime regiment, because they knew more about the wide world than any other of his subjects).

There are for instance 21 entries relating to the word ‘ship’ from ship money which was a tax on maritime cities to pay for the navy, and got Charles I of England into capital trouble when he tried to extend it to inland merchants; to the White Ship which a reputedly drunken crew wrecked on the way to England in 1120, killing the heir to the throne and leading to war between two royal claimants.

A little more up to date, what were Q ships? They were warships disguised as tramp steamers in World War One. Then you have a tight ship, these days meaning a lean and disciplined organisation, but originally a vessel on which the ropes and rigging were taut and in good order.

This is one of those ‘one thing leads to another’ reference books which draw you mercilessly from one expression to the next – a challenge to put down. Brewer’s world was one of clear order, and as with the internet, you should never be satisfied with an answer, but use it to check and cross-check with as many surces as you can.

The original author would have been amused, although perhaps not wholly amazed, at the way the English language has evolved, in line now with technology and the print and broadcast media, and imports from overseas.  Downsizing, quantitative easing, tablet (computer), bad bank, the Chipping Norton set: such vocabulary was unknown in the 20th century, let alone the 19th. Dr Brewer would have approved of the dictum of Periander of Corinth, one of the Wise Men of Greece (in itself an interesting dictionary entry): “Nothing is impossible to industry.” The Norfolk minister did stop short of going too far in explaining the phrase “the Greeks had a word for it” (because it was a way of referring to unmentionable things).

An old slogan from the newspapers, “all human life is here, ” springs to mind as one leafs the pages.  As is the way with reference works in the modern age, we have various special sections, including a supplement entitled Brewer’s Gems – curiosities from Dr Brewer’s work over the ages. There are elaborately detailed entries on many subjects including heraldry, pub signs, celebrities and recluses.

Dr Brewer made his debut in around 1838 with his book A Guide to the Scientific Knowledge of Things Familiar. It is speculated that its success allowed him to travel in Europe, and on returning to England in 1856, he began work on his famed dictionary which saw the public light of day 14 years later.

In her foreword to the new edition, Susie Dent emphasises: “It is not a straightforward dictionary, nor is it an encyclopaedia. It is, in fact, unlike any other reference book that exists, anywhere.” Ms Dent says that even after 19 editions, the choices and voices of its author are still at its heart.

Incidentally, you might think you know how the surname Brewer was derived – from the honourable trade of brewing beer – but you might be wrong.  The dictionary edition of 1896 tried to set the record straight, saying it stems from the French word bruyère, meaning a heath.