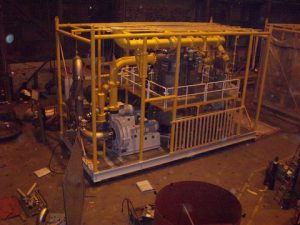 Wärtsilä Moss AS has won a contract with Daewoo Shipbuilding & Marine Engineering Co (DSME) to supply inert gas generator (IGG) units to a floating production, storage and offloading (FPSO) unit for the INPEX-operated Ichthys LNG project in the Browse Basin, approximately 200km off western Australia. The vessel is due for delivery in April 2016; it will comply with strict Australian environmental standards and has a projected lifespan of 40 years. The Ichthys Project is the largest oil and gas development in the Northern Territory and will deliver significant social and economic benefits to Australia. Wärtsilä Moss’ scope of supply is two identical IGG Skids for installation in a hazardous area, to prevent risk of explosion, forming part of the topside module with pressure vacuum (PV) Breakers and control systems as loose supply for installation by the South Korean shipyard.“We have a good relationship with TOTAL oil and gas group, a joint venture partner with INPEX, where complete inert gas systems’ projects have been successfully supplied to several FPSOs.” says Odd Ivar Lindlov, General Manager, Inert Gas Systems Offshore. “Recent projects have included the Pazflor and Clov field developments in which we have received very good feedback from the operating units.”

The IGG units for the Ichthys project are installed to serve the primary operation of the FPSO, to transfer condensate to tankers for delivery to markets. The topside modules are surface installations which allow the drilling and/or production and/or processing of offshore hydrocarbons. 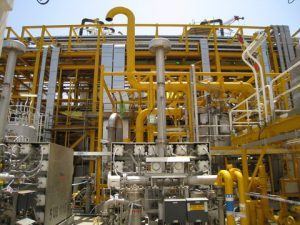 “The IGG units perform the same function as they would do on a tanker vessel but as these units fire fuel gas they are positioned on topside to avoid the use of fuel gas in an enclosed space. This is a requirement from TOTAL to ensure natural ventilation of the topside, ” adds Mr Lindlov.

Gas from the Ichthys field will undergo preliminary processing offshore to remove water and extract condensate and the gas will be transported to onshore processing facilities in Darwin through an 889km-long subsea pipeline.

The onshore processing facilities are being constructed to produce peak volumes of 8.4m tonnes of liquefied natural gas (LNG), 1.6 million tonnes of liquefied petroleum gas (LPG) per annum and approximately 100, 000 barrels of condensate per day. The production volumes represent more than 10% of Japan’s LNG imports at current levels.

On 31st January 2012, Hamworthy plc was acquired by Wärtsilä Corporation. The official name for the Moss business that was within Hamworthy plc is now Wärtsilä Moss AS.

Wärtsilä is a global leader in complete lifecycle power solutions for the marine and energy markets. By emphasising technological innovation and total efficiency, Wärtsilä maximises the environmental and economic performance of the vessels and power plants of its customers. In 2011, Wärtsilä’s net sales totalled EUR 4.2 billion with approximately 18, 000 employees. The company has operations in nearly 170 locations in 70 countries around the world. Wärtsilä is listed on the NASDAQ OMX Helsinki, Finland.www.wartsila.com