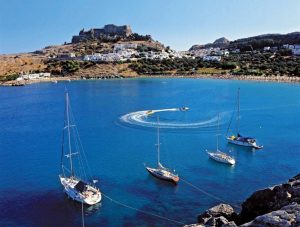 Rhodes bathed by sun and sea

The Greek island of Rhodes has launched its Sunkissed by Rodos campaign at London’s prestigious World Travel Market. It was possibly the most ‘hands-on’ travel campaign in history, with a troupe of happy ‘sunkissers’ boldly offering embraces to passers-by. By James Brewer

Its message was that with northern Europe starved of sun in recent months, “it is up to Rhodes to pass on some of its god-given sunshine and happiness to us all in the UK.” The southeastern Aegean Sea holiday spot claims to benefit from the highest number of sunny days in Europe. The campaign, which will run until the first day of spring, was initiated by P.RO.TOUR, the Tourism Promotion Organisation for Rhodes.

It makes much of the legend that when Rhodes rose from the sea, it was bathed in sunlight by Helios, the god of the sun. According to the tourist board, it is rumoured that the “amorous ambience” of Rhodian evenings helped foster the passionate liaison of Jackie Kennedy and Aristotle Onassis… 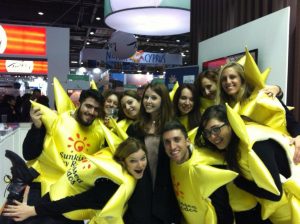 Having improved its infrastructure in the last two decades, the island is emphasising its appeal to the cruise market. Its port, on the northern tip of the island, has berths at Akandia pier for local ferries, and a main pier with depth of up to 13 m for cruise ships. With an eye to attracting further large cruise vessels, the port has opened a new 580 sq m terminal. Rhodes has ambitions to become a major home port for cruise companies in the region. Its proximity to Mykonos, Santorini and Heraklion is seen as bolstering this claim.

Meanwhile, the smaller Greek islands are campaigning hard in their own way for more visitors.

For example, Astypalea, as “the bridge which connects the Cyclades to the Dodecanese” has its own airport, and is served by a ferry connection with Piraeus five times a week and with Rhodes once a week, both services provided by Blue Star Ferries. To Kalymnos, there is a three times weekly service run by ANEK Kalymnos. 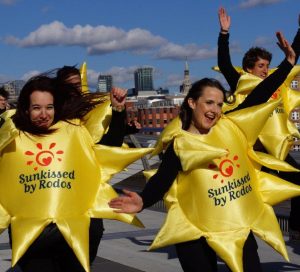 Larvotto reopening to go ahead despite… plus more

IB “HOTEL” software products on board all MSC...