Waves of the Adriatic (detail), acrylic on paper by Daphne Cazalet

Having gone through four substantial changes of address on this planet, Daphne Cazalet knows all about the contradictions of migration. She herself has worked over the years with migrant women who were trying to establish new lives and come to terms with the feelings of hope that contrast with the sense of loss of the anchor of birthplace. 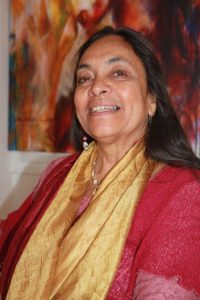 Her female figures are sensuous, whether walking under an Australian mango tree, or emerging symbolically naked through an open door into a new life. An overarching red hue projects the women into their new standing of migrant.  The status update, to borrow a term from social media, is about upheaval: change, adapting, adopting, feeling isolated from the past.

Daphne was born in India, and spent her early life at Naini Tal, a lakeside summer retreat in the foothills of the Himalayas, before migrating to England with her family. She was initially conscious of being different from her new contemporaries, which made her shy of speaking up – “I was hiding behind something” – although she felt that she did belong to the UK.

At Dartford Grammar School, Kent, she excelled in painting, and her poise and confidence came through as she trained in drama in London and taught and acted in theatre in Bristol, before migrating to Australia. The move to Australia brought home to her the experience her mother and father had years previously of adjusting to a strange land, although Daphne acclimatised rapidly to her new life, getting involved in many theatre and arts projects in Canberra, Adelaide and Sydney. In particular she assisted migrant and disadvantaged women through the channels of theatre and other art forms. This was challenging in Sydney’s western suburbs (“on one housing estate, more than 70 different languages were spoken”) where she was the first multicultural arts worker supported by the Australia Council for the Arts.  After moving to Queensland, Daphne took leading roles with Tropic Sun Theatre Company of Townsville, guided by its founder the late Jean-Pierre Voos, a much-loved artistic director. 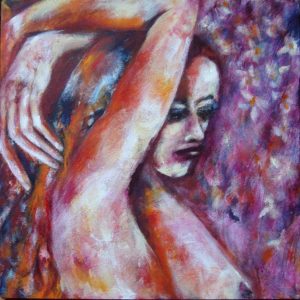 Daphne has recently migrated again, this time to southern Italy, with her partner John du Feu, a distinguished actor, painter and writer who only recently played the role of King Lear in the Shakespeare Under the Stars series in Townsville. Now Daphne paints on the Salento Penisula in Puglia, where her enthusiasm for marine scenery has heightened.

It is not surprising to learn that Daphne is inspired by the courageous Artemisia Gentileschi (1593–1656), who has been described as the most important woman painter of her epoch in Europe. Gentileschi, who had to put up with slander and slights for her devotion to her calling, boldly portrayed female protagonists and took up the Caravaggio trade mark play of dark and light. Daphne is faithful to that tradition of dramatic contrasts of light, suggesting in several works a migrant woman’s experience of coming out of the dark into the light, or standing between light and the dark.

Wild in Salento V, acrylic on paper by Daphne Cazalet

She is intrigued by body language, which she studies intently. Amid silence, so much is expressed through the body, she insists. Several of her models were actors and dancers, and the fluid lines she commits to canvas reflect this. In one painting the subject is both looking back and looking forward, as migrants tend to do.  “I have always been interested in life drawing, ” she says.  It yields such expressiveness.

As she settles down in her new Italian home, she finds comfort in depicting the flora of the area, and the impulse of the sea. 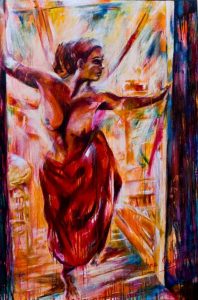 Open door I, acrylic on canvas by Daphne Cazalet

Her first experience of Italy inspired her to paint seascapes. She was staying in an apartment during winter, when she opened her window to see waves crashing tempestuously against the rocks, with spray foaming up to 30 m high, and the powerful smell of sulphur. At work on her sea themes, on thick paper “I splash watercolour, acrylic and even household paint. I like the effect of layering, the sense of building colour upon colour, brush stroke on brush stroke.”

Marks of Transit: paintings by Daphne Cazalet. Southfields Gallery, 223 Wimbledon Park Road, London SW18. Until November 15, 2012. Readers in Italy can look forward to Daphne’s presence at exhibitions in 2013 in Genoa, Rome and elsewhere.

Dear Daphne,
You are a great inspiration to me! Your paintings are so, so beautiful and I enjoyed immensely your Private View at the friendly Southfields Gallery. A BIG thank you!.

Thanks for including my art Kate! All of these projects are amazing…I had already pinned several of these as my favorites too!