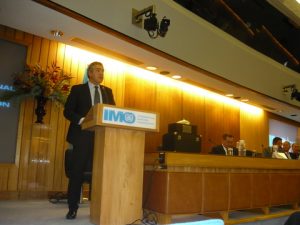 The Greek Minister of Shipping, Maritime Affairs and the Aegean Kostis Moussouroulis at the podium delivering his address

Following our yesterday’s news and the Secretary-General’s of IMO Mr. Koji Sekimizu speech and delivery of the award “2011 International Maritime Prize”  to Adm. Mitropoulos, we hereby bring you the address by the Greek Minister οf Shipping, Maritime Affairs & The Aegean, Mr. Kostis Moussouroulis, MP, for the  same occasion to the Secretary General Emeritus of I.M.O., Admiral (H.C.G.) Efthimios Mitropoulos.

It is a great honour and privilege for me to be with you on the occasion of the award of the 2011 International Maritime Prize to the IMO SG Emeritus Mr. Efthimios Mitropoulos, and address this ceremony on behalf of the Greek Government. 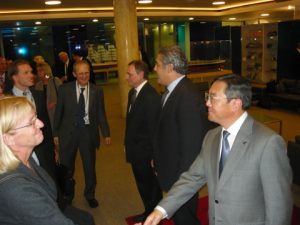 The Greek Ambassador Konstantinos Bikas, The Greek Minister of Shipping, Maritime Affairs and the Aegean Kostis Moussouroulis and The Secretary-General of IMO Koji Sekimizu greetings guests

My country and its Maritime Administration, deeply appreciate the services Mr. Mitropoulos has rendered to shipping and IMO. In particular, his leadership, clarity of vision and purpose to key issues of international shipping policy and the prudent management of the Organization’s resources.

Greece, as a maritime nation fully committed to the objectives of IMO, expresses its appreciation for Admiral Mitropoulos’ contribution to the Organization’s mission, for his work to position IMO in the forefront of the UN specialized agencies and for the global recognition of its achievements at a time when multiple risks are noted in international trade and the world economy. 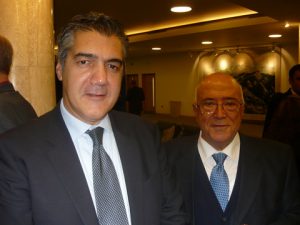 Mr. Mitropoulos has been fully committed to the promotion of the IMO as the only organization for the development and adoption of global maritime standards, a task that has led to the enlargement of the Organization to 170 States.

Although it is impossible to exhaust in a few minutes Mr. Mitropoulos various achievements, I will try to highlight some that I consider to be of particular importance: 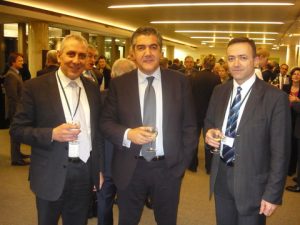 Also, the human element factor and the seafaring profession have played a major role in the shaping of IMO’s objectives and policies. In this respect, in order to attract new entrants to the shipping industry, Mr. Mitropoulos launched in 2008 the “Go to Sea” Campaign, aiming to promote seafaring as an attractive career option.

Within this context, Admiral Mitropoulos, we fully share your statement that “putting people first can bring the desired results”.We thank you for the further promotion of the campaign’s objectives through the 2010 World Maritime Day’s theme: the “Year of the Seafarer”, drawing attention to the unique situation under which seafarers offer their services: the hard work, 24 hours a day, 7 days a week. 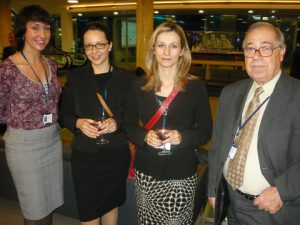 Eleni Mastrokostas from HELMEPA’s External Relations Department, Maria Lignou and Stella Rissaki, both from the Merchant Shipping Inspectorate of the Greek Ministry of Shipping, Maritime Affairs & the Aegean and Aristides Vondas, Marine Division Director from Hellenic Register of Shipping

As far as the phenomenon of piracy and the battle against it: in this case, again, Mr. Mitropoulos played a significant role in increasing awareness for this issue, bringing forward by the IMO to the Security Council, in November 2005. Thanks to these efforts, we can already see an improvement in the situation of Somalia, although we are mindful of the situation in other areas.

The efficient and effective functioning of the IMO Secretariat and accurate execution of the IMO’s budget, under the leadership of Mr. Mitropoulos, should also be emphasized. The contribution of Mr. Mitropoulos to the work of the Organization, through his 33 years of continuous service and in particular through the 8 years as a SG, is evident, inter alia, by concrete results such as the vast number of IMO Conventions and Instruments, which have entered into force, or adopted.

It is my pleasure to conclude, by repeating Greece’s sincere appreciation to Mr Mitropoulos. 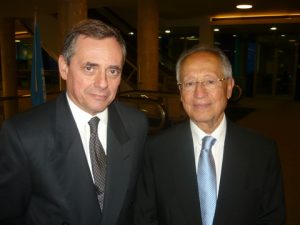 Dear Mr. Mitropoulos, your integrity, your profound knowledge of the sector makes your home country proud of your successful leadership of a reputed international institution. Your leadership of IMO is a testimony that, even in difficult times in the economy, strategic vision is always essential to the formation and implementation of policy.

Finally, making reference to your speech in this room of IMO a year ago, quoting the poet Constantine Kavafis, I also wish you personally to “keep Ithaca always in your mind”.

As mentioned yeterday in our reporting, following the Award and the unveiling of Admiral Mitropoulos’ portriat, a recption in his honour was hosted by Kostis Moussouroulis  at the mezzanine floor of the IMO HQ’s, hence the pictures you see above.