The 17th session of the BLG Sub-Committee was held from 4 to 8 February. Principal issues of interest to members are outlined below.

Members will recall previous reports of inconsistencies identified in chapters 17 and 18 of the IBC Code and the concern expressed that strict application of the current criteria for assigning carriage requirements to products originally evaluated prior to 2004 could lead to unnecessarily stringent requirements for a number of high volume products. It was therefore agreed to look further at the criteria themselves and a number of amendments have subsequently been proposed to the criteria in chapter 21. As an exercise to test the results these amendments were applied to the “Big Movers List” developed by IPTA during the Annex II revision process.

This exercise demonstrates that while applying the chapter 21 criteria as they currently stand to all the longstanding products in the IBC Code would lead to some far reaching changes, including a number of products being moved to Ship Type 1 and independent tanks, applying the proposed amended criteria would have far less drastic effects. The indications are that there would be a few changes of ship type, but only from type 3 to type 2 or chapter 18 to type 3. A number of other changes to carriage requirements would be triggered in many of the products, primarily with regard to closed gauging, controlled venting and toxic vapour detection. In addition, many products would be subject to increased special requirements, most notably those for toxic products found in regulation 15.12 of the IBC Code.

We would emphasise that as yet this remains an exercise in testing the proposed amendments to the criteria, rather than concrete proposals for amendments to carriage requirements. It has been agreed that these changes in classification criteria should now be applied to all the products in the IBC Code and the results examined further, with particular attention being paid to the likely impact of increased special requirements such as those in regulation 15.12. One issue that has been highlighted is that of pressure valve requirements in 15.12.4, which requires valves to be set at 0.02 Mpa for the carriage of toxic cargoes. For the sake of clarity we obtained the following breakdown on the valve requirements from Class colleagues:

3. In the case of ships carrying propylene oxide, the setting is not greater than 0.7 Mpa and 0.53 Mpa for propylene oxide/ethylene mixtures. (IBC Code 15.8.24)

Where a vessel’s CoF already contains the full complement of IBC Code cargoes, an expanding of the number of products to which special requirements apply will presumably not make any difference. However where an inability to comply with some of the special requirements in chapter 15 of the IBC code means that a vessel is already restricted in the number of cargoes it can carry, an increase in the number of products which have special requirements could lead to a further restricted CoF. If any member is operating such vessels and has concerns about further restrictions we would ask that they contact the secretariat in order that we can provide input to discussions on possible impact of these proposals.

Two products, namely Tall oil soap, crude and Alkanes (C10-C26), linear and branched (flashpoint< 600C) were evaluated for inclusion in List 1 of the MEPC.2/Circ. as valid for all countries and with no expiry date. Both products have been in List 1 for some time as Tripartite agreements and it should be noted that the carriage requirements for Tall oil soap will change slightly. These amendments still have to be formally agreed by the MEPC and MSC in May/June this year and should continue to be treated as Tripartites until then.

In addition three new trade-named mixtures were considered and carriage requirements assigned for inclusion in List 3 of the MEPC.2/Circ. as outlined in Annex 2.

Details of all products can be found in Appendix 1

A total of 29 cleaning additive were found the meet the criteria outlined in MARPOL Annex II. These products are listed in Appendix 2 and will be included in the next edition of the MEPC.2/Circ.

Reissuing of Certificates of Fitness

The group had been asked to consider how to ensure that when amendments to the cargo lists in the IBC code come into force all chemical tankers have an updated Certificate of Fitness onboard by the date of entry into force. The IBC code makes it clear that that the CoF must refer to the latest

MSC and MEPC resolutions which contain the amendments and Attachment 1 (the product list) must reflect the same date as the CoF. It was agreed that in order to ensure a smooth transition issuing of revised certificates may commence from the date of formal adoption of the amendments rather than the date of entry into force. The revised certificate may be kept on board but will not become valid until the date of entry into force. A circular will be issued following MEPC and MSC later in the year outlining the procedure. The draft of this circular can be found at Appendix 3.

While under most IMO conventions PSC verification of compliance relies, in the first instance, upon inspection of documentation and only proceeds further if there are grounds for believing that the vessel is not in compliance, the Ballast Water Convention allows for PSC to take samples of ballast water even where the treatment system on board is type approved and there is documentary evidence to demonstrate that it has been maintained and operated properly. The convention prescribes that any sampling should be carried out according to guidelines developed by the IMO, but the IMO has so far struggled to finalise guidance on a simple, reliable sampling method that would not give a wide range of results. This has been a cause of significant concern to industry and is considered to be one of the barriers to ratification for a number of member states who fear that their vessels could be penalised even though they are acting in good faith in operating type approved ballast water treatment systems.

IPTA was a co-sponsor of a document proposing that upon entry into force of the Ballast Water Convention Port States should not carry out ballast water sampling until standardised and internationally agreed PSC sampling and analysis guidelines are in place. The BLG Sub-Committee, however, did not accept this proposal. After lengthy discussion, it was agreed that the Guidelines should be finalised on the basis of the current science with respect to sampling and analysis of ballast water and once the convention enters into force these guidelines should be applied for a trial period of two to three years (as yet there is no agreement on how long this period should be), with the members states using the procedures for scientific and research purposes in order to further improve and standardise the sampling protocols. It was further agreed that during this period there should be no criminal sanctions based solely on sampling, although it is important to note that the United States reserved its position on this point and maintains her right to take any actions she sees fit once the convention has entered into force.

In 2009 the MEPC adopted guidelines for exhaust gas cleaning systems, including wash water discharge criteria for wet scrubbers which take into account the fact that that the washwater from these systems has a low pH due to the presence of sulphuric acid.. These criteria are considered by many to be too stringent for the majority of wet scrubbers to comply with and it had been agreed that they may be revised in the future as more data becomes available on the contents of such discharge and its effects. Denmark had submitted the results of a study showing that discharge of washwater with a low pH value (3) has a negligible effect on the marine environment in the long term due to the buffering capacity of sea water. It was proposed that the discharge criteria could be relaxed in order that such scrubbers could be employed.

While this proposal was well received by many, due in large part to a European Commission edict that prevented EU states from offering support in the debate, the Sub-Committee did not ultimately agree to the amendments to the 2009 guidelines. Member states are invited to provide further information on the impact on the marine environment of discharging low pH value washwater, although since the study carried out by Denmark was very thorough it is hard to see what direction any further research would take. IPTA pointed out that with the reduction in sulphur limits in ECA’s due to come into force in less than two years many owners are currently trying to evaluate methods of ensuring that they will be in a position to comply and it is regrettable that certainty has not been provided with regard to which technologies will be acceptable in order for owners to be able to carry out their forward planning with confidence. The Chairman called for further information to be provided regarding the current availability of exhaust gas cleaning systems that can meet the current requirements; this will mean a further delay of twelve months before any sort of decision can be made on any amendments to the discharge criteria thus leaving both shipowners and manufacturers in limbo.

The BLG Sub-Committee has for some time been engaged on the development of this code, concentrating primarily on safety requirements for ships fuelled by LNG. Sweden had submitted a paper to this session proposing that Methanol and Ethanol as fuel be included within the code, given the similarities in requirements to LNG. The LNG lobby argued successfully that work should concentrate initially on finalising the requirements for LNG and that only afterwards should other “cleaner” fuels be considered. Sweden, supported by IPTA, argued that the research and information already available meant that no delay in adopting a “Gas” Code would be incurred if these fuels were to be included in the ongoing work and managed to get the Sub-Committee to agree to their proposals being considered further in a correspondence group that will report to BLG 18 in 2014, when the code is expected to be adopted. 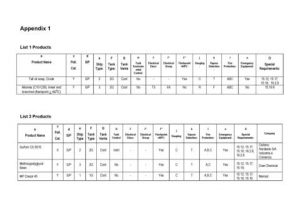 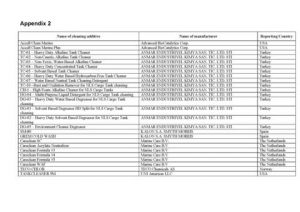 1 The Marine Environment Protection Committee at its sixty-fifth session (13 to 17 May 2013) and the Maritime Safety Committee, at its ninetysecond session (12 to 21 June 2013) reviewed the matter of the replacement of an existing International Certificate of Fitness for the Carriage of Dangerous Chemicals in Bulk (“certificate”) by a revised certificate that is required to be issued as a consequence of amendments to the International Code for the Construction and Equipment of Ships Carrying Dangerous Chemicals in Bulk (IBC Code).

2 Both Committees agreed to approve the following guidance, which for the matter described in paragraph 1 above can be used in place of the provisions of MSC-MEPC.5/Circ.6, with regard to the replacement of an existing certificate by a revised certificate that is issued before the entry into force of amendments to the IBC Code:

.1 the issuance of the revised certificate may be initiated from the date of adoption (the later of the adoption dates by MSC or MEPC, as the case may be) of the IBC Code amendments, rather than the date of entry into force of the amendments;

.2 the revised certificate should have the same expiration date as the existing certificate;

3 As an illustrative example of paragraph 2 above, the attached diagram explains two scenarios:

.1 Scenario 1 is an example of a renewal survey carried out between the adoption date and the entry-into-force date of the amendments to the IBC Code; and

.2 Scenario 2 is an example of an existing certificate that is valid beyond the entry-into-force date.

4 The Committees noted that the above arrangements should facilitate a smooth and practical implementation scheme for the worldwide fleet of chemical carriers that may require to have revised certificates immediately upon the entry into force of the amendments to the IBC Code.

6 Member Governments are invited to bring this circular to the attention of all parties concerned, in particular, masters, shipowners and port State control officers.

Opportunity knocks for innovation at EUROPORT 2013