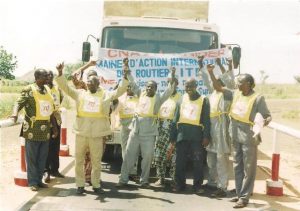 The ITF has written to Niger’s minister of transport urging government action over a high court ruling that its affiliate Syndicat National des Conducteurs Routiers du Niger (SNCRN) must pay penalties and damages to a company following lawful strike action.

On 12 December 2012, the Niamey Unclassified High Court ruled that SNCRN had to pay XOF 15, 200, 000 (approximately £20, 000) in penalties and damages to Trenson Investment Trading, after the company filed a complaint in court in respect of the immobilisation of its trucks following strike action by the union the previous summer.

In his letter, sent on 27 February 2013, ITF acting general secretary Stephen Cotton said:   “We believe that the 72-hour protest strike on 8-10 August 2012 and a general strike of seven days on 27 August–2 September 2012 were organised in accordance with the Nigerien labour code. We, therefore, fully support the SNCRN and these activities and view this recent decision by the High Court as a violation against freedom of association as enshrined in the ILO Core Conventions.

“Our affiliate, SNCRN has been raising issues linked to the method used to unload fuel tankers at SONIDEP depots and problems posed by the loading of foreign tankers at the refinery with the Niger authorities and employer on a number of occasions. However, despite several attempts to discuss these issues, we understand that the problems remain unchanged and there has been no dialogue or negotiations on the matter.

“The ITF therefore calls on the Government of Niger to act immediately on this matter so that the law suit for damages against the union’s actions is withdrawn and that fruitful dialogue and negotiations can be opened on the problems being raised by SNCRN.  If this matter is not resolved, we will bring it to the attention of ITF affiliated transport unions worldwide.”

Class Certificat​e onboard all Panamanian Vessels of 500 GT and above from June 1, 2013

Reaching for the sky