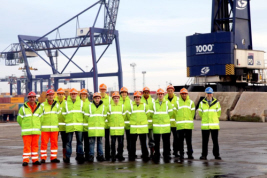 PD Ports has announced the creation of 13 full time permanent positions for Teesport based apprentices. The new dock operations roles in both bulks and container related areas of the business will commence at the end of April, after the existing apprenticeship programme completes. The programme took over 18 months of training and is on track to achieve 100% success rate with all 13 apprentices achieving a NVQ Level 2 in Dock Operations.

PD Ports initiated the programme in conjunction with the Redcar Development Trust, whose aim it is to support and develop the local youth and their families who want to invest in their own future. Following selection the 13 candidates, ranging from 18-30 years of age participated in a PD Ports specific pre-employment programme lasting 12 weeks, which, on completion, led to a place on the tailor made Dock Operators apprenticeship scheme. David Robinson, PD Ports’ CEO, commented: “We are delighted to announce the creation of new jobs for our apprentices.

The news is particularly pleasing given its National Apprenticeship Week, which helps to highlight the growing importance of apprenticeships as an access route to learn a trade, feel motivated and ultimately gain employment. “At PD Ports we are fully committed to investing in both our existing workforce and new people seeking opportunities within our business. The introduction of a Dock Operations apprenticeship scheme was a first for us at Teesport. Historically our apprenticeships at Teesport have focussed on electrical and mechanical engineering trades.” Working in partnership with the Redcar Development Trust and the High Tide Foundation, a new charity aimed at raising aspirations and employment opportunities, PD Ports plans to develop similar programmes in 2013.

“With the majority of our existing workforce at Teesport coming from within a three mile radius of the Port, it is vital for the longevity of our business that we invest in the region’s young people today. Our ultimate aim is to engage with the wider industrial community on Teesside through the High Tide foundation to collaborate on issues such as training and skills, and deliver greater prospects of work, employability and skills development in the area, ” concluded Mr Robinson.

PD Ports is a privately funded, multi award winning ports and logistics business delivering solutions to improve supply chains. We are based in the north of England and operate from locations at many key UK ports and logistics centres. We own and operate Teesport, one of the largest UK ports, which handles over 35M tonnes each year.

Teesport has achieved 70% growth in container volumes in the last 5 years and has now been developed to become the northern gateway for container traffic handling over 420, 000 TEU (twenty foot equivalent unit) every year and is positioned for further significant growth. All of our port operations are backed by a comprehensive logistics network through PD Logistics, which is part of our Group.