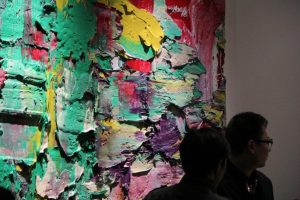 With great and deserved fanfare, an inaugural international contemporary art fair, ART13, has been launched this year at Kensington Olympia, hosting 129 galleries from 30 countries under the one roof of the grand exhibition hall.

Although the show was new to London, it has a fine pedigree, having been founded by Tim Etchells and Sandy Angus, who in 2007 established Hong Kong International Art Fair,   which is now said to be the leading contemporary art fair in the region. 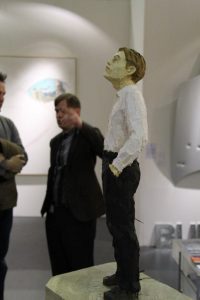 The London event welcomed over 25, 000 guests who included designers, collectors, artists, and businesspeople, all struggling on its opening evening to squeeze from one stand to another, as everybody vied to view as many collections as they could.

And that was a hard thing to do as owners and their assistants from those 129 galleries were keen to buttonhole you to enthuse about their artists. After the bustling preview evening, the event continued for three days, giving an opportunity for a more considered exploration.

Countries represented at the fair included the UK, Russia, China, and the US. Latin America made its presence felt alongside exhibitors from nearer home such as those from Belgium, France, Italy, and others. In numerical terms, almost 40% of the galleries represented were British , but the borders of the regular European art fairs were extended to open a fascinating window to much Asian and Middle Eastern art.

“It is very interesting – to see so many international galleries here. This is a very intriguing concept and is very new in London as you normally don’t see this in major art fairs. Globalisation is a great opportunity to have all of them here and to admire their work, ” said Thomas Eller, a VIP guest at the event.

For the VIP guests, the experience went beyond Olympia: the organisers provided a special invitation to events in the framework of the exhibition days which encompassed private views of Manet, Lichtenstein, and Picasso, in the Royal Academy of Art, Tate Modern and Courtauld Gallery respectively; with breakfasts in those galleries as well as private talks involving the collectors and contemporary artists.

“The talks events are really good as  you can share your views with your colleagues, ” said Joanna  Mackiewicz-Gemes, an fine art consultant.

ART13, sponsored by Citi Private Bank, attracted renowned  art collectors such as Charles Saatchi and Fatima Malecki from London, Uli Sigg from Switzerland, the Americans Don and Mera Rubell, Dasha Zhukova from Russia and Patrizia Sandretto Re Rebaudengo from Italy.

Less well known in Europe, but very important to the art market, were the collectors from China, the Gulf region and Indonesia, who have opened their collections to the public and were gathering with their European and American counterparts for what is believed to be the first private museum ‘summit’ to discuss the possibilities of cooperation, according to The Daily Telegraph.

New born it may be, butART13 has impressed the public, many of whom were swift tobestow plaudits on the organisers.

“It was very professionally produced.  Well done! But I would suggest allowing more time to see the exhibition as they close the day sessions at 6pm, and that’s too early, ” said Penny Mather, a guest at the fair.

Visitors are now eagerly marking in their diaries the dates for next year’s fair, which will take place  from February 28 to March2 2014.