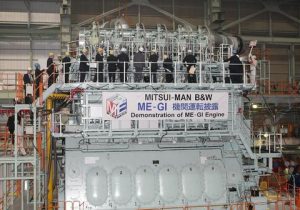 In his speech, Dr. Umlauft described the ME-GI engine as representing a milestone in a shipping era where stricter emission regulations and rising fuel costs are calling for environmentally friendly and economic solutions.

He said: “Dual-fuel engines are tailored perfectly to these demands. When operated in gas mode, CO2 and nitric oxide emissions are markedly reduced, while sulphur oxides, soot and particle emissions are virtually non-existent. Additionally, dual-fuel engines give ship owners and operators tremendous flexibility and cost-efficiency, since the fuel can be changed based on its availability and price.”

Umlauft stated that gas, as a fuel, was on the rise, and that hurdles like infrastructure and refueling were now being resolved. In this respect, he gave the recent example of Jurong Port in Singapore, one of the biggest trans-shipment centres between Southeast Asia and Europe, where a new LNG terminal is now being established. 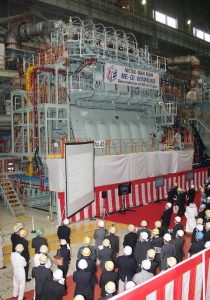 He concluded by referring back to Mitsui’s building of the world’s first commercial high-pressure gas injection two-stroke engine, a 12K80MC-GI-S delivered to the power station at Chiba in 1994 and said: “As we are only now beginning to receive orders for marine ME-GI engines, this early order bears witness to Mitsui’s readiness and commitment to enter into new and daring projects. I would like to thank Mitsui for our long-term successful cooperation and especially congratulate it today for the achievement of producing and demonstrating the first Mitsui MAN B&W 6S70ME-C-GI engine. I am looking forward to further exciting and promising projects that we will realize together in the future.”

In his speech, Thomas Knudsen spoke of his pride in the result of many years of joint effort between Mitsui and MAN Diesel & Turbo and also referenced the first GI engine that was developed in Tamano and later entered service, producing electricity for the Tokyo area. He called the demonstration of the 6S70ME-C-GI engine another visible sign of the high entrepreneurship and innovative capability of Mitsui.

He continued: “With this technology, Mitsui and MAN Diesel & Turbo will be able to supply the most environmentally friendly and most economical propulsion plants for not only LNG carriers but also VLCCs, container ships, RoRo ships, bulkers and other ship types. These will all, in the near future, be able to harvest the benefit of utilising natural gas as a fuel.” Knudsen pointed to the large attendance of global shipowners as recognition of the benefits ME-GI technology would bring, including its compliance with future emission limits well in advance of their introduction.

He went on to describe ME-GI technology as traditional two-stroke engine technology that can be maintained and overhauled by chief engineers already capable of maintaining existing two-stroke engines and called the ME-GI engine “a natural choice of technology for merchant ships where the goal is to provide ship owners and shipyards with environmentally friendly engines at a competitive price.”

Unveiled at a major event at MAN Diesel & Turbo’s Copenhagen Diesel Research Centre in May 2011, the ME-GI engine represents the culmination of many years’ work. Depending on relative price and availability, as well as environmental considerations, the ME-GI engine gives shipowners and operators the option of using either HFO or gas – predominantly natural gas but also LPG and methane.

The following month, MAN Diesel & Turbo was able to confirm the successful introduction of the ME-GI to the market with the announcement of another order when Teekay LNG Partners L.P. (Teekay LNG), an offshoot of Teekay Corporation, the international shipping group, placed an order for two LNG carriers powered by 2 × 2 5G70ME-GI engines, including an option for three further ships.