Thursday 30 May 2013 -The International Sailing Federation (ISAF) is pleased to announce that 20 competitors from 11 nations have been approved to receive funding from the Athlete Participation Programme (APP) for the 2013 Sail First ISAF Youth Sailing World Championship.

Since 2002 APP funding has enabled over 200 sailors the chance to compete at the ISAF Youth Sailing World Championships.

With some steady results from Dublin Bay, Ireland last year they will benefit from the same support in their bid to push up the leader board.

APP has given developing sailing nations the chance and opportunity to represent their nation at the premier regatta for youth sailors. Sailors from Botswana, El Salvador, Andorra, St. Lucia and Paraguay have all been given the opportunity to compete on a level playground with developed and experienced sailing nations. 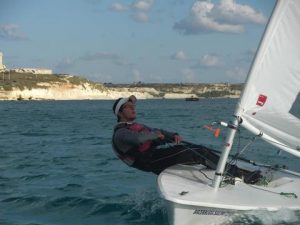 The 2013 Sail First ISAF Youth Worlds is no different and welcomes sailors from Mozambique for the first time. Laser Radial sailors Neidy Justini Nhaquile and Velick Manchica will fly their nation’s flag in Cyprus.

Limassol, Cyprus will host the 43rd edition of the Sail First ISAF Youth Worlds and the sailors on APP will be able to compete in Limassol with subsidised travel and entry.

They will also benefit from the coaching of Hugh Styles, World Youth Sailing Trust coach, who will guide the athletes.

The Athlete Participation Programme allows athletes, via their MNA, to apply for support in a number of different ways:

Event Coaching/Support
Athletes which attend the event without a coach or team leader can apply for coaching support. Coaching is provided by the World Youth Sailing Trust.

Travel Subsidy
To assist in covering the expenses of the athlete’s travel, they can apply for a Travel Subsidy to cover either part or the entire cost of their travel.

Editorial rights free images will be available during the event via ISAF’s Flickr stream at http://www.flickr.com/isafmedialibrary

The ISAF Youth Worlds was first held in Sweden in 1971. The 2013 ISAF Youth Sailing World Championship in Dublin, Ireland will be the 43rd edition of the championship.