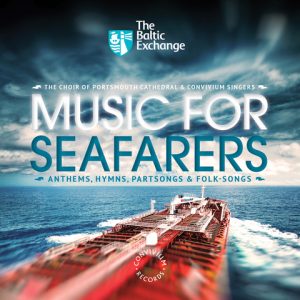 As part of the shipping industry’s efforts to support seafarers worldwide, the Baltic Exchange released on the 3rd of June a collection of choral music called Music for Seafarers. The London headquartered Exchange’s members include much of the world’s commercial shipping interests.

Funds raised from the sale of the music will go towards seafaring charities Mission to Seafarers and the Sailors Society as well as RNLI Salcombe where the Baltic has supported lifeboats for over 100 years.

The highlight of the collection is the Anthem for Seafarers, a brand new composition based on the most famous of seafaring hymns “Eternal Father, strong to save”. The hymn,  originally written in 1860 by William Whiting, is associated with both the British and American navies as well coastguards and marines. The Anthem for Seafarers is an updated version of this hymn composed by Malcolm Archer, a leading light in the music world and the former
director of music at St Paul’s Cathedral. First performed in 2010 in Vancouver to commemorate the International Maritime Organization’s “Year of the Seafarer”, the piece forms the centre piece of the collection.

Baltic Exchange chief executive Jeremy Penn said: “This is a really wonderful project and one which I hope will raise the profile of merchant seafarers around the world. As shipbrokers and charterers, Baltic Exchange members are at the business end of the shipping industry and we all rely on the dedication of the 1.3 million men and women who sail the world’s ships to keep global trade moving. ”

Composer Malcolm Archer said: “For many years I had wanted to compose an anthem version of the text “Eternal Father,  strong to save” when Michael Drayton, the chairman of the Baltic Exchange, approached me with just such a commission for dedication to the Exchange and to mark his retirement as Chairman. It also seemed appropriate that I should set these words to music since the author of them, William Whiting (1825-1878), was Master of the Quiristers at Winchester College, a position which I now hold as their Choirmaster. With that strong link the anthem is assured of performances within the College and it is my sincere hope that it will not only be performed regularly for the Baltic Exchange but become a popular choice amongst the many seafaring communities around the world.”

The CD retails at £9.99 or £6.99 (digital download) and is available from www.musicforseafarers.com.

The Baltic Exchange
The Baltic Exchange is the world’s only independent source of maritime market information for the trading and settlement of physical and derivative contracts. Its international community of over 600 members encompasses the majority of world shipping interests and commits to a code of business conduct overseen by the Baltic.

Baltic Exchange members are responsible for a large proportion of all dry cargo and tanker fixtures as well as the sale and purchase of merchant vessels.

Mission to Seafarers
The Mission to Seafarers is the world’s leading international maritime welfare charity
providing help and hope to crewmen and women of all ranks, nationalities and beliefs. We
offer emergency assistance, practical support and spiritual care for seafarers and their
families in need. We support seafarers as victims of piracy, shipwreck, abandonment,
loneliness and danger by providing a vital lifeline in 260 ports in 71 countries. Our 121 Flying
Angel seafarers’ centres offer a place of rest and recovery when seafarers are ashore.

As a long-forgotten workforce in the public imagination, we raise the profile of the world’s 1.3
million seafarers with stakeholders and the media internationally. In international public
affairs, we champion safe and fair working conditions. We were founded in 1856 and are
funded entirely by voluntary donations, charitable grants and sponsorship from the shipping
industry. Our Patron is HM The Queen and our President is HRH The Princess Royal.
www.missiontoseafarers.org

The Sailors’ Society is an international charity providing a personal lifeline for merchant seafarers all over the world. Established in 1818 in the Port of London, the charity has expanded to meet an overwhelming global need for practical and emotional support through a growing network of multidenominational Port Chaplains.

The objectives of the Sailors’ Society are to strengthen and support family relationships, to improve seafarers’ wellbeing through emotional support, to provide opportunities for respite through the provision of free and safe transport and to give financial assistance in times of severe need.

Sailors’ Society’s vision is ultimately to replace isolation with belonging for the world’s seafarers.
www.sailors-society.org

RNLI Salcombe
The RNLI is the charity that saves lives in UK waters. It provides, on call, a 24-hour lifeboat search and rescue service and a seasonal lifeguard service. The Baltic Exchange has strong ties with the RNLI’s Salcombe Lifeboat Station.

Salcombe lies at the entrance to the Salcombe & Kingsbridge Estuary, at the southern most point of Devon. At the seaward end lies a notorious sand bar, which in certain wind and tide conditions has proven treacherous for mariners. The rugged coastline to the east & west of Salcombe, combined with the elements has proven to be a constant contest for shipping and the lifeboat, which has been established in the town since 1869.

The Baltic Exchange and its members are keen supporters of the RNLI and have sponsored lifeboats for nearly 150 years.