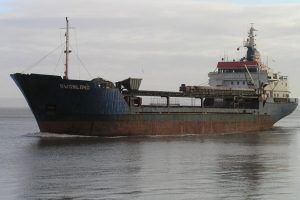 The ITF condemns the lack of effective regulation and control in the international shipping industry that allowed this tragedy to occur.

The MAIB report reveals how cost cutting and negligence led to the sinking of the general cargo ship Swanland in the Irish Sea in November 2011, with the loss of six Russian seafarers.

As the MAIB notes, the Swanland is one of nearly 250 general cargo ships that have foundered in just over 10 years. In this period over 800 seafarers have perished in often ageing vessels. The Swanland was over 30 years old when the sinking occurred.

It is questionable whether such an old ship should have been trading at all; but as a minimum it needed regular maintenance and structural repairs. This report highlights the failures in its maintenance of the ship, and the fact that no structural reviews had taken place since 2009.

Even more alarming is the fact that Swanland Shipping Ltd changed the classification society of the ship from Lloyds Register to the International Naval Surveys Bureau in 2009 to reduce their fees by 30 percent. The report highlights the fact that unscrupulous operators can make savings by cutting back on repairs and the rectification of deficiencies.

The report also reveals that the ship managers, Torbulk, did not make available to the chief officer the means to conduct the strength and stability checks on board the ship which are necessary prior to cargo loading. In addition the owners and managers of the ship seemed to be unaware of the risks of carrying high density cargoes and the importance of obtaining accurate information so that the ship could be safely loaded.

The MAIB further reveals that during the course of its investigation it became evident that many shipowners and managers are unaware of the importance of compliance with the International Maritime Solid Bulk Cargoes Code (IMSBC), and that they may believe it only applies to bulk carriers.

The ITF believes that this accident investigation report must now be the catalyst for urgent action – in particular  for general cargo ship safety to be made a priority at the International Maritime Organization (IMO). The fact that at the time of the accident the Swanland had been certified as being in compliance with all applicable statutory requirements makes a mockery of the existing regulatory framework, the ITF states.

National governments and the international shipping community can no longer stand on the sidelines as this terrible loss of life continues. The ITF is calling for:

The MAIB report can be seen at:

Note: On 12 June we had inserted the following in the site; here is the link: https://allaboutshipping.co.uk/2013/06/12/rmt-calls-for-manslaughter-charges-over-he-swanland-sinking/

Experts have problems with Government’s approach to Jackson Reforms