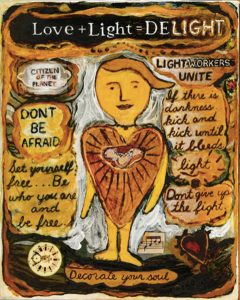 What sort of flower are you? On a cold June Sunday afternoon in London, a goodly number of people were ready to answer this seemingly curious challenge to describe their inner bloom. Posing the question to dozens of the 5, 000-strong crowd who flocked to the 2013 Art Car Boot Fair off London’s buzzy Brick Lane, was the renowned illustrator Carolyn Gowdy.

Carolyn has made her name with a cogent collage and cartoon style that speaks in a charming and sometimes disarming way to everyone’s yearning for love and individuality.

Plucking props from boxes of fabric and other paraphernalia, Carolyn gently directed flowerful transformations of men, women and children who found their fancies tickled for photographic portraits with a difference. A mother and son envisaged themselves as cornflower and sunflower (they were incidentally the prize winners of a Pass the Art Parcel raffle to raise money for the charity Just for Kids Law); two gentlemen nobly posed together as a lily of the valley and a lilac; other participants variously saw themselves as a peony, a daffodil, roses, exotic wild flowers, and even endangered varieties, perhaps alluding to the precarious status of the human race in the 21st century. 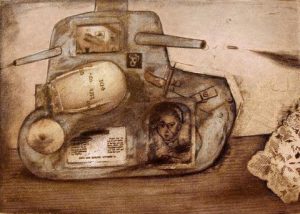 In the spirit of the exercise, one man, Dr Charlie Easmon, posed clutching a red rose in his teeth, alongside Ms Charlie Robertson who took on the gorgeous mantle of a daffodil. Schoolboy Gus, aged eight and dressed in a golden jumper, became a snowdrop.

As Carolyn put it, “bold souls and curious creatures were invited to take part.” Her idea for these “live poem portraits” has been developing over the last two years, and her pitch of an imaginary garden was one of 70 stands at the 10th annual Art Car Boot event. Elsewhere, amid manifold entertainments, some of the best-known contemporary artists offered affordable works at much reduced prices– Gavin Turk, Sir Peter Blake and many others. Queues stretched around several street blocks to cram in to a very ordinary car park with extraordinary exhibitors, well in advance of noon opening time. Shiny vintage automobiles such as a 1948 Vauxhall Velox were just about visible through the throng. Motor manufacturer Vauxhall has sponsored the fair since its debut on the West Pier of Brighton in 2003. Its ancestry dates from the 1990s: the late Joshua Compston’s Fête Worse than Death and Gavin Turk’sLivestock Market and Articultural shows. 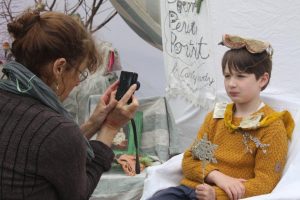 “What a wonderful day, ” said Carolyn after the event. “I felt completely inspired. “ 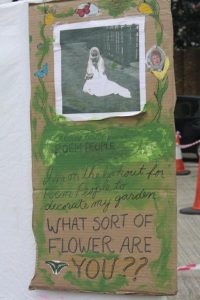 What sort of flower are you? (C) Carolyn Gowdy

Accessibility is central to Carolyn’s art: she produces what she brands as Gowdyworks:” magic timepieces, follow your heart compasses, bird toys, wearable art pieces, limited edition prints from etchings, and light reflectors.” The more thought-provoking works include those from her series Theatre of Women, in which female characters attempt to spread their wings to rattle the confines into which they are penned by society. The quest for liberation is far from vengeful. It stems from expressions of warmth and tenderness, as Carolyn advances precepts of the calibre of Love and Light = Delight; and Life is an Adventure, Life is a Gift.

Seattle-born Carolyn has been pursuing these themes since moving to London after studying at Rhode Island School of Design. Besides adding to her Theatre of Women series, there have been numerous commissions, including designing the set for a production of Voltaire’s Candide.

Other successes have included the National Open Art Competition at the Chichester festival, the Works on Paper Watercolour Fair, the London Art Fair, and the 2013 London Group Centenary Open. Her Bird Woman was selected for the 2013 Royal Academy Summer Exhibition. 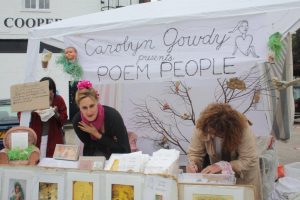 She has for 20 years contributed illustrations for literary work in the Spectator magazine, including most of its Christmas stories and the Shiva Naipaul prizes for short stories and essays.  She illustrated the text Tbilisi:The Edge of the Real written by winner of the re-launched Shiva Naipaul Memorial Prize, Tara Isabella Burton, in 2012. 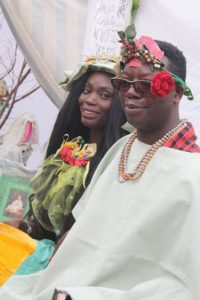 As to floral portraiture, the green shoots have been planted, and it is burgeoning. At the Open East Festival (a new weekend festival to celebrate the re-opening of the Queen Elizabeth Olympic Park to the public) on July 27 and 28 2013, a centre-piece is planned called the Portrait Carousel, at which Carolyn and other artists will tempt visitors with many ways of having their portrait done.