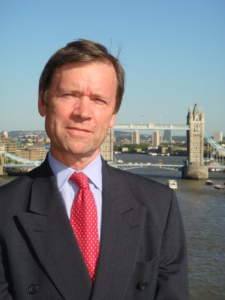 Made up of professional UK maritime service firms, Maritime London showcases the breadth and depth of the cluster. The UK’s maritime industries accounts for 2.1% of the British economy, contributing £13.8bn to the UK economy directly.

Jeffrey Evans is Managing Director, Gas, at Clarksons, a leading provider of integrated shipping services and is an Alderman and Sheriff of the City of London.

“I’m delighted and honoured to have been appointed Chairman to Maritime London and carrying on the work so ably handled by my predecessor David Moorhouse. This year is a particularly big year for us with London International Shipping Week taking place in September. This is a real chance for us to show shipowners, operators, charterers and government just what a fantastic maritime cluster we have here in the UK. I look forward to banging the drum for the UK’s maritime services around the world.”

Founded in 2000, Maritime London is a not for profit promotional body for UK based companies which provide professional services to the international shipping industry.

Funded by over 100 companies and organisations from a wide range of disciplines, Maritime London helps ensure that the UK remains a world beating location to base a maritime related business.

Maritime London organises trade missions; connects its members with an extensive network of governmental and company contacts; undertakes research and liaises with government and other industry representative bodies.

Membership of Maritime London is open to any UK based business which provides services to the international shipping sector.

Business: Managing Director, Gas, H. Clarkson & Co 2001 – to date. Entered as a Trainee in 1972, joined the Tanker Department as a broker in 1973, before moving to the Gas Department in 1979. The company is the largest international shipbroker, is headquartered in London, with 34 offices in 16 countries and is quoted on the London Stock Exchange.

Chairman, Maritime London, the umbrella organisation promoting London and the UK’s maritime cluster and professional services;   Member of the Baltic Exchange and of the Institute of Chartered Shipbrokers.
Elected to the City of London Corporation as Alderman for the Ward of Cheap 2007: Has served on various committees including Finance, Establishment, Markets,  Port Health & Environmental Services, Planning & Transportation, The City of London Freemen’s School and is currently on Epping Forest & Commons, and The Honourable The Irish Society. Also serves as a Trustee of the Mansion House Scholarship Trust Fund and the Samuel Wilson Loan Trust, helping younger people facing hardship to start and operate new businesses.

He sits as a magistrate on the Central London Bench, is Patron of the Ward of Cheap Club and is a Churchwarden of St Lawrence Jewry, the church of the Corporation of the City of London.

Schools: He is an Almoner of Christ’s Hospital, and also a Governor of the City of London Academy Islington.  Trustee of the Saint Paul’s Cathedral Chorister Trust.

Family: Married to Juliet, formerly a solicitor (maritime litigation), and subsequently Adviser at Chelsea Citizens’ Advice Bureau. They have two sons. Alexander is a freelance consultant and a fellow at New York University Center on International Cooperation, where he works on resource scarcity; married to Emma who is a climate change expert with the Department for International Development; they have a daughter and son and are currently in Ethiopia. Second son, Julian, is a journalist and writer. His first book ‘Philosophy for Life and Other Dangerous Situations’ has been sold in nineteen countries.