Cartographic craftsmanship from the Age of Discovery

Cartographic craftsmanship from the Age of Discovery: modern map and maritime experts celebrate at Greenwich the superb contribution of Ottoman Admiral Piri Reis

In an age when nations trusted to sea power to expand their conquests as never before, the brilliant Ottoman map-maker, sailor and scientist Piri Reis made an immense contribution to maritime exploration and instruction.

This remarkable man produced in the early 16th century impressively accurate maps, and books brimming with details of seaports and coastlines, alongside guidance on navigating by the stars.

At the time, superior cartography was led mainly by Christian nations, but in 1513 the Piri Reis atlas of the known world startlingly amassed all the latest techniques of the craft, offering intimate knowledge of new lands and seas. In 1528 an updated and more decorated version was presented to Sultan Suleiman the Magnificent. 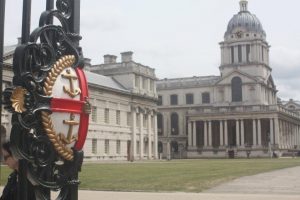 The great achievements of Piri Reis (reis was an Ottoman title meaning master mariner) are being celebrated in this 500th anniversary year of the production of his pioneering map.  Highlight in London was a conference supported by the Turkish Embassy on June 14 at Greenwich University that brought together leading experts in the field and an audience including maritime and map connoisseurs.

It is a mystery how Piri gained access to so much intelligence at a time when copies of some maps made elsewhere were freely available, but others were considered state secrets. One might think in this context of the high level outrage that has been vented since the beginning of 2012 over the leaking of diplomatic cables and of revelations of eavesdropping by the US, UK and other governments. 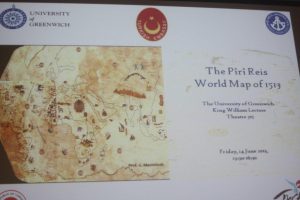 With Piri Reis, we are talking about one of the oldest maps of America still in existence. It is a beautiful, important and mysterious piece of work, according to Prof Gregory McIntosh, an authority on the subject, and he says that it is unusual because of the amount of information it contains about people and animals of the New World and about the voyages of Europeans.

Underlining how much the multi-talented Piri continues to be revered in Turkey, the country’s only maritime university bears the name Piri Reis.  It was established in 2008 at Istanbul to formalise and advance maritime education already supported by the Turkish Chamber of Shipping and member companies. Just a few weeks ago, a memorandum of understanding on academic co-operation was signed with the World Maritime University.

In its own topical tribute, Google on April 7 devoted its worldwide home page to the precious 1513 map. 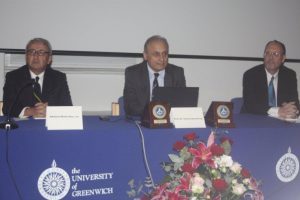 One of the few surviving maps of the period on parchment, it caused great excitement when a fragment 63cm by 87cm was found in the Topkapı Palace of Istanbul in 1929, because inscriptions indicate the delineation of the western coasts of the Atlantic and of the West Indies is based on the maps of Christopher Columbus (1451–1506). Since none of the original maps of Columbus have survived, this prompted headlines such as: At last the world can see how Columbus’s own map looked.

At the Greenwich event, retired Admiral Metin Ataç, president of the International Association of Maritime Studies, said that as a former commander in chief (the 22nd) of the Turkish Navy, he bowed before the memory of Piri Reis and his great knowledge about maps.

Admiral Atac described how the young man sailed with his uncle Kemal Reis in western Mediterranean in operations against the Spanish fleet, Malta, southern France and the Balearic islands. Kemal Reis died in 1510 – as far as is known, his ship was sunk off the island of Naxos. Piri Reis withdrew to his birthplace Gelibolu (Gallipoli) to work on his map, and met among other key figures of the epoch, the Lesbos-born Ottoman admiral Barbaros Hayreddin (Barbarossa) who secured many victories in the Mediterranean. 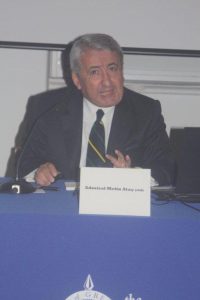 Piri took the opportunity when the navy sailed to Egypt of presenting his 1513 map to Sultan Selim. Despite this, he may have fallen out of favour because he was assigned no taks in succeeding campaigns against the Cyclades and Crete. Much later, in 1548 he returned to action to capture the harbour of Aden from the Portuguese. His actions during a further naval campaign against Egypt were criticised, perhaps unfairly, and he was sentenced to death in 1554.

For his first world map he broke new ground by drawing from at least 20 charts and mappae mundi. These were from Arab, Spanish, Portuguese, Chinese, Indian and Greek sources and some were broadly contemporary, but others dating a long way back.  According to Piri, they included eight Ptolemaic maps from the era of Alexander the Great. Known as the father of cartography, Claudius Ptolemy, a Greek resident of Alexandria, was responsible for the famous library there from AD 127 to 150. His gazetteer entitled Geographia sought to catalogue 8, 000 place names.

The Piri map portion found in 1929 is around one-third of the original, and shows the western coasts of Europe and North Africa, the Caribbean islands and much of Brazil.

Some members of the Greenwich audience were puzzled as to how he was able to collect such information, when maps might be considered politically sensitive documents. Prof McIntosh answered that at the time, Italians were copying the Portuguese and Spanish maps “like crazy” and some Spanish and Portuguese map makers were given permission to sell them overseas.

Piri included information from the map said to have been made by Columbus on his second voyage. His drawing of the Brazilian coast, down to La Plata in today’s Argentina, is amazingly correct, and the continuation appears to show Antarctica under ice. Some geographers dispute that what is shown is Antarctica: the problem is the length of coast depicted. 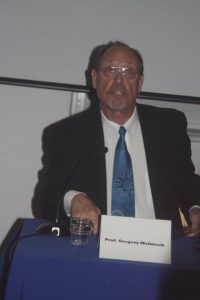 Prof McIntosh described the 1513 map as “a beautiful work of art, a cultural icon, based on the latest cartographic and geographical information.” He said that maps of those days were compilations. We can estimate that the complete map had close to 100 inscriptions. It had to be remembered that “every map is inaccurate.  The only accurate map is a globe. If you take a round map and make it flat, you distort something in order to make the sphere flat.”

Many map makers since the times of the ancient Greeks showed a massive southern continent. They speculated that this had to be to balance symmetrically the northern hemisphere. In the Piri Reis map the southern continent was connected to South America. He scorned some fanciful theories of authors who saw portrayals of Antarctica on old maps as evidence of the ancients’ advanced technology or of primitive astronauts. These claims were based on a false promise that the drawings are accurate.

What we are looking at is what Columbus expected to discover when he sailed across the Atlantic, said Prof McIntosh. He was less than complimentary about the geography skills of Columbus. The “mainland” he saw was the island of Cuba, but Columbus always thought it was the Asian mainland. “Show him five fingers, he would draw three.” Piri’s map confirms perfectly with Columbus’s ideas about  the East Indies (what we now know as the West Indies).  Prof McIntosh detailed place names in the Piri map that corresponded to Spanish language descriptions in the writings of Columbus.

Apart from the maritime maps of  1513 and  1528, Piri masterminded some 5, 700 detailed coastal maps in his portolan, the Kitab–ı Bahriye, based on compass directions and on distances estimated by pilots at sea.

Prof McIntosh has examined the Piri Reis map in depth and published his research in the book The Piri Reis Map of 1513 (Athens and London: University of Georgia Press, 2000). 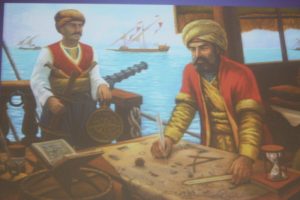 Prof Christopher Bellamy, director of Greenwich Maritime Institute, extended a welcome to the gathering on behalf of Greenwich University. He referred to the close co-operation between Greenwich University and Piri Reis University. Piri had succeeded in an extraordinary achievement of 500 years ago, said Prof Bellamy. Today, he added, “I tell all my students, in red pen on their essays, that ‘a map would have been useful.’ This map of Piri Reis is probably worth 250, 000 words.

Prof Osman Kamil Sağ, rector of Piri Reis University,  outlined the progress of his academy. It was the only university in Turkey specialising in the maritime area, having been founded in 2008 by the Turkish Chamber of Shipping with the support of 8, 400 maritime companies. The language of instruction at the institution is English.