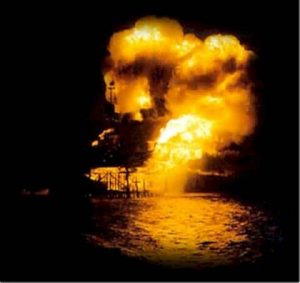 On the 25th anniversary of the Piper Alpha disaster, which killed 167 men on the night of 6th July 1988, offshore energy union RMT slammed the government for undermining safety by meddling with the inspection regime implemented on the recommendation of the Cullen Report, produced following the tragedy.

The reorganisation of the Health and Safety Executive inspection operations for the 30, 000 offshore oil and gas workers has been conducted without any consultation with trade unions or industry bodies.

RMT general secretary Bob Crow said that there were serious concerns amongst the workforce and HSE offshore inspectors themselves that these proposals will undermine the culture of continuous improvement in the offshore safety regime which was so crucial to avoiding accidents, leaks and other safety emergencies in what is a dangerous industry and which was supposed to be the lasting legacy of Piper Alpha.

“At the time even the Tory government accepted all of Cullen’s recommendations, key amongst them being reform of the HSE to create a stand-alone inspectorate for the offshore industry, the Offshore Safety Division which has just been abolished.

“This is clearly a cost-cutting measure despite the fact that the North Sea has massive oil and gas reserves and some of the infrastructure is over 40 plus year old.

“In the last year alone we have seen repeated leaks, evacuations and shut downs, including on the ageing oil platform North Cormorant which has been extracting oil since the 1970s.

“The deep and lasting trauma caused by the Piper Alpha disaster should mean the industry never forgets the lessons that were learned out of this tragedy and 25 years on the Government must be forced to turn around their undermining of the offshore safety regime.(source: RMT text / BBC pic)

The Snowden spy saga: Skeletons in the cupboard of the French too…? Who’s next…