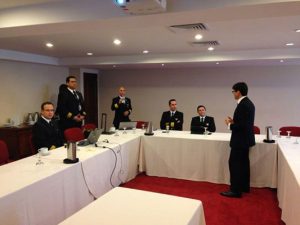 27 September 2013 – The ITF last week backed its affiliate the Asociación Colombiana de Aviadores Civiles (ACDAC) in its ongoing fight with aviation company Avianca for fair wages. The union began ‘zero extra work’ action– not working beyond the terms outlined in its agreement with the company – in response to eight months of failed wage negotiations.

Workers at the company have been taking lower wages since 2003, when Avianca asked for salary sacrifices to help the company repair its financial standing. Since then, Avianca has made great commercial, operational and financial strides, and is now one of Latin America’s leading aviation providers.

This hasn’t translated into pay increases for workers; according to ACDAC, Avianca pilots’ salaries are 40 percent lower than at other airlines in the region. ACDAC is asking for a wage increase of 25 percent for its workers, and has been negotiating with Avianca to this end since 31 March when its agreement with the company expired. So far, the company has remained intransigent.

Union president Jaime Hernández met with the Colombian labour minister last week, to hand over a letter from the ITF urging government intervention in the dispute. The zero extra work action has already led to more than 173 flights being cancelled in Colombia this week.

Antonio Rodriguez Fritz, ITF Americas regional secretary said: “The ITF and its affiliates support the legitimate requests of ACDAC in negotiating fair wages. The airline has to reward the effort that workers have made over the past eight years to help Avianca become one of the leading airlines in the region. We appeal to the Government of Colombia to intervene to help find a beneficial solution for both sides, and stop the dispute from escalating to affect connectivity in the region”