From a cargo wharf in the trading heyday of the British Empire to a 21st century  assortment of studios for more than a dozen artists – that has been the course of Johnsons Island in the Thames. At this former river and canal hub, the hubbub is now all about art, the flow is from paint palettes, and mosaic-making rocks!

Johnsons Island at Brentford has become a base for artists who love being by the river, ranging from Sarah Stanley who fashions hand-made contemporary art mosaics, to Tara Winona who creates “art for the soul, ” to Colin Campbell who is inspired by the abstract drip painting techniques of Jackson Pollock. Like their fellow new islanders, they draw inspiration from their closeness to nature and from the flow of the waters – despite having now and then to stop up the doorsteps against particularly high tides. 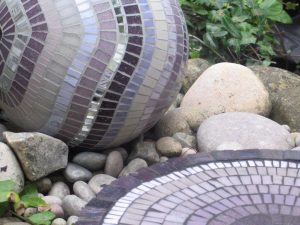 Ceramics by Sarah Stanley on show at Fountain Gallery, Thames Ditton, in March 2013

Hard by the lock junction of the Thames and the Grand Union Canal, the island in Victorian times was the site of Staffordshire House, the home of a Dr Johnson (not to be confused with the 18th century lexicographer Samuel Johnson). The place came to be known as Johnsons Island instead of its earlier name of Staffordshire Wharf.  It had been a transit point for barge traffic with the industrial Midlands, and merchandise from the British colonies.  It is sometimes forgotten that Brentford was at one time a big rail freight junction.

What was later to be known as Johnsons Island was familiar to diarist Samuel Pepys, who describes a 1665 visit to an inn in “Brainford.”

The island had been near-derelict for years when it was leased from British Waterways in 1993 by James Bissell-Thomas, for his business of making globes.  He rebuilt the structures around the main, early Victorian, brick building to provide arts studios, supported by an exhibition gallery. Although Mr Bissell-Thomas has since relocated his company Greaves & Thomas to the Isle of Wight, he retains his close connection with, and fondness for, the island. 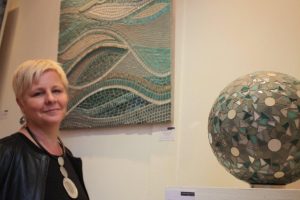 Greaves & Thomas literally is a ‘global business, ’ in the sense that it produces various kinds of display globes, using traditional methods: many of the spheres are papered and painted by hand, and are aged to give the aura of stages of cartographic history from 1492 to the present.

Claiming to be the UK’s only commercial globe-maker, and the only company world-wide to specialise in historical replica and themed globes, the firm had its wares on show at the autumn 2013 open studios weekend on the island.

In contrast with the bustle just across the footbridge linking the island to Brentford’s Catherine Wheel Road, the colony of artists, sculptors, painters, photographers and artisans pursue their individual projects in peace. 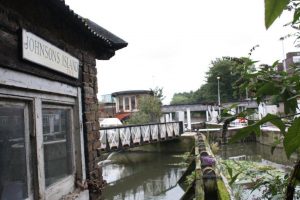 Johnsons Island in the Thames

One of their number, Sarah Stanley, has been making fine mosaic objects for more than 15 years. At a time when contemporary mosaics are gaining increased international attention, she is well placed to understand the niceties of the demand.

She dips into her neatly stacked collection of materials – vitreous glass, ceramic, millefiore, mirror, stone and marble — to fashion decorative items, bowls and wall panels for home interiors and for gardens and other outdoor areas. Mosaic stepping stones and other garden enhancements have lately been popular – possibly because homeowners confronted by a difficult housing market have put off moving and decided to treat themselves to ‘something nice’ for the garden.

Sarah welcomes her clients into her studio to see their commissioned work in progress. With the help of specialist contractors, she delivers and installs for customers large mosaic murals and entire floor and patio designs. 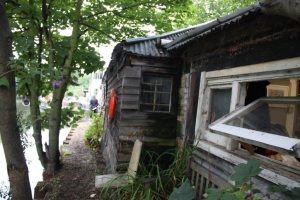 While much of her output is on a small scale, she recently finished a large memorial stone weighing 150 kg. Other recent work includes mosaic-topped polystyrene spheres prepared with three layers of sand and cement.

Sarah says she is inspired by aspects of geology and geography: she has studied mosaics in Italy, Spain, Turkey, Libya, Iran, Thailand, India and Vietnam. Just as fascinating to her is the structure of music: the appearance of notation and how the music plays – for instance whether it is sweeping or staccato. “Sometimes the materials almost tell you what you should be doing with them, ” she says. “People talk of in vino veritas, but I believe that in art veritas – truth – comes out in the work.” Sarah’s respect for the feeling of the materials results in a style that is in general restrained. Even in her more colourful pieces she concentrates on tone and texture, 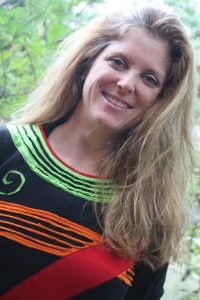 Sarah has been working on Johnsons Island since 2008 – she was earlier engrossed in her family business designing specialist forklift trucks. She is a leading supporter of the British Association for Modern Mosaic, which has more than 400 members.

Another enthusiastic denizen of Johnsons Island is Tara Winona, originally from Sydney, where she trained as a designer and illustrator. An unexpected chain of events, starting from time in France, led her in 2009 to set up her studio at Johnsons Island. She had been about to move from Paris, when she was badly hurt in a road accident, but as she recovered met “a lovely man, ” Theo Cox, and they decided to settle in London. She is now married to Theo, who shares with her a professional record of lighting design and has many projects tp his credit including a Festival of Music and Light at the Petronas Towers in Kuala Lumpur in 2012, and a Rolling Stones private concert in Barcelona.

Tara described taking her Johnsons Island studio for a return to painting as “a leap of faith” but is happy there, as she says light-heartedly, “absent-mindedly dipping paint brushes in [my] tea as the kingfishers flash past.”

In her appealing water colours, acrylics and range of cards, ““I have an eclectic style – still discovering myself and following my heart, ” she says.

Tree of Life, acrylic on canvas, by Tara Winona

Other artists making a splash on Johnsons Island include Colin Campbell, who work and reworks his abstract canvases in a quest for “the effects of invisible forces at work.” After more than 30 years as an artist, he is still experimenting, these days intrigued by how computer design can contribute to creativity.

Johnsons Island was described in WestSide magazine in November 2012 as “one of London’s best kept arty secrets.” Thanks to its artists reaching out to a wider public, it is no longer quite so secret, and is thriving in its new history chapter. 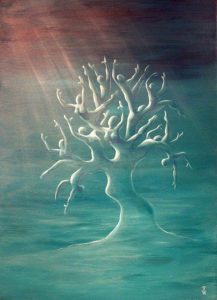 Tree of Awakening, acrylic on canvas, by Tara Winona

Amid all the intense artistic activity, there are stubborn reminders of the island’s maritime past. In the middle of the studio of Dianne Preston – who lives on a narrowboat behind the island and sculpts birds and animals from papier mâché and wire (“trying to get to the essence of a fellow creature is important to me”) – a heavy pivot that once supported a cargo crane stands immovable.

There are exhibitions twice a year on the island, which is open for visitors by appointment at other times. For further information, see www.johnsonsislandartists.com where there are links to the websites of each artist.