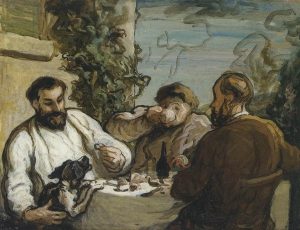 One of the world’s greatest satirists by dint of his outrageous caricatures, drawings and even sculpted heads reminiscent to today’s audience of the British television show Spitting Image, Marseilles-born Honoré Daumier made his career in Paris – and  longed to be recognised as one of the great artists of his day.

The Royal Academy in London is helping him achieve his wish, 134 years after his death, with a selection from his prolific output of 4, 000 lithographs, drawings, watercolours and oils,

A walk around the 130 works gathered by curators Catherine Lampert and Ann Dumas for the exhibition entitled Daumier (1808-1879): Visions of Paris prompts tantalising visions of what the realist artist would have made of today’s global leaders and the crazy political contrortions of Europe.

Ms Lampert, an independent curator, and Ms Dumas, curator at the Royal Academy, have sensitively given Daumier his very due as fine artist that was rarely accorded to him in his lifetime.

A staunch republican and champion of the dignity of the downtrodden, Daumier lambasted the corruption of monarchy and ministers, and the slaughter brought about by their disastrous wars. One of his most telling works – and one surely relevant to today’s fractured Europe, is an 1867 lithograph of the continent represented by the figure of a sleeping woman, balanced precariously on the point of a bayonet, above a bewildered crowd. 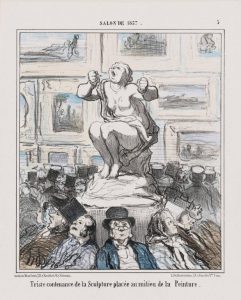 His most daring works were censored in his lifetime, and over the years, he has been more popular in eastern Europe, particularly during Soviet times, and in Germany, than in the UK. London is seeing many of the works for the first time in what is the first major exhibition in the UK of the artist since a 1961 Tate Gallery show. Even Paris has not had a substantial showing of his works since 1999.

Like so many talented artists – he was described by his near-neighbour Charles Baudelaire as one of the most important men in the modern art of his time – Daumier was hard-up for most of his life. He lived – just ahead of the blossoming of the Impressionist movement –through political and social turmoil in France and much of the rest of the continent, and was keenly moved by it. He was bitterly disappointed by the betrayed outcome of revolutions, which he supported, to establish a French republic.

Daumier was largely self-taught and never worked directly from life or from models – he would return to the studio to paint from memory incidents in everyday life, suffused with sympathy for the common man and woman, and with gentle mockery of the habits of the bourgeoisie.

He moved with his family from Marseilles to Paris when very young, and settled later with his wife in an apartment on the Quai d’Anjou on the Ile Saint-Louis, often used the buildings seen across the Seine as background to his paintings. He recorded women toting bundles of washing to and from laundry boats moored on the river, and in one scene what looks like a longshoreman shouldering cargo up a plank.

It was not long before he was imprisoned for penning an image of Louis-Philippe as the Rabelaisian character Gargantua seated on a commode, gorging on the cash of the commoners and excreting honours and favours to his courtiers. The plates were seized by police and attempts made to destroy all impressions.

One wonders what Daumier would have made of today’s sad stream of refugees risking and losing their lives to cross the Mediterranean to Europe. Daumier depicted people fleeing Marseilles on land to escape a cholera epidemic and poverty.  In the space of four months, the disease was reported to have killed 2, 252 in the southern port city. On show is his pen and ink, wash and red chalk study Fugitives, also called The Emigrants,  and the plaster relief it prefigured.

He built up quite a following for the many such works published in newspapers, where he also denounced the abuse of power by lawyers in the court system, of which he had a poor opinion.

Some of his paintings show more tranquil scenes from the new urban environment: for instance, rail passengers in A Third Class Carriage are sympathetically portrayed as they proceed on their journey.

As a contributor and commentator, he was sceptical about the press and its publishers. An 1866 lithograph includes flying ducks signifying what these days is called gutter journalism – the French for ducks,  canards, denotes rumours in both French and English.

He distrusted democracy in the wrong hands. In 1869 he draws a sculptor who represents the voting system and asks of the stone being carved: “the electoral bloc – will it be god, table or washbasin?”

Some of his last works were born of reaction to the ferocious wars of the 1870s and the destruction of the Paris Commune: it is clear that he knew of the works of Goya who was similarly anguished over the horrors of war. His final lithographs are among his most powerful, foreshadowing the continuing political instability of Europe that was to feed further conflict in the 20th century with increasingly destructive armaments.

Like his friend Jean-François Millet (1814–1875) who illustrated peasant life,  Daumier was a skilled draughtsman. His work drew praise from contemporaries Delacroix and Corot, and giants of the next generation Degas, Cézanne and Van Gogh. Picasso, Francis Bacon, Gerald Scarfe, and more recently Paula Rego, Peter Doig, William Kentridge and Quentin Blake are among those who owe him a debt.