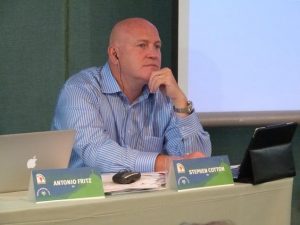 The ITF today applauded the determination of a Philippines union – and the international solidarity which helped sustain it – that has led to the re-employment in regular jobs of some 600 workers.

After an intense struggle lasting over two years, the Philippine Airlines Employees’ Association (PALEA) has won agreement from Philippines Airlines (PAL) for the return to work of staff who were outsourced on inferior conditions and short term contracts, threatened with redundancy, and even locked out. Six hundred staff who refused to claim separation benefits are now being re-employed intheir regular posts. PALEA’s resistance has been backed throughout by unions in the Philippines and worldwide, particularly those affiliated to the ITF (International Transport Workers’ Federation), of which it is a member. The history of PALEA’s defence of jobs and the campaign to support it can be found at the ITF’s Save our PAL’s jobs sitewww.saveourpalsjobs.org

ITFacting general secretary Steve Cotton commented: “Since the outsourcing plan was first mooted in 2010 PALEA has fought back against it in a tireless defence of those thousands of jobs. They said the plan was crazy, unfair and risked the wellbeing of the airline itself. They were backed in this by their trade union colleagues in the Philippines and worldwide. Now they have been proved right.”

Paddy Crumlin, ITF president and national secretary of the Maritime Union of Australia (MUA), added: “What stands out first and foremost in this important victory is the strength and determination of the members of PALEA. For two years they waged a struggle, standing fast as a united group. That strugglealso brought out the best in our ITF network globally as union members on every continent showed solidarity, either by simple messages sent to show support, leafleting Philippine Airlines and even visits to the camp set up near the PAL terminal. Let this victory stand as an example for us to follow in the day, months and years as we unite across the globe to push back against injustice that threatens a fair living for all transport workers.

“In Australia, ITF affiliates have run a long campaign to assist our comrades in the Philippines and this has been replicated around the globe. Importantly, PALEA members continued to offer their solidarity to other global ITF campaigns throughout their struggle.”