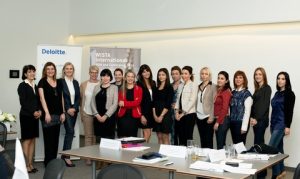 Some of the participants in the leadership workshop, with Irene Rosberg (left) and Despina Panayiotou Theodosiou (isecond from left) – picture by Christos Hadjichristou

A superb accomplishment – that was the verdict by participants and organisers after the first major workshop within the ambit of the Women’s International Shipping & Trading Association specifically on the theme of business leadership. The high-level training exercise was run for WISTA Cyprus.

Strong interest in the day-long seminar, on November 15 2013 at the Limassol headquarters of Interorient, is seen as a favourable omen for the important 2014 international annual meeting and conference of WISTA in just under a year’s time, for which the Cypriot city will be the venue. The conference will coincide with the 40th anniversary of the founding of WISTA.

The leadership event was designed and coordinated by Irene Rosberg, program director of the Executive MBA in Shipping and Logistics (the Blue MBA) at Copenhagen Business School, and was delivered by CBS Executive Faculty.

Ms Rosberg, who is president of WISTA Denmark, said: “Running this leadership workshop was a major achievement for WISTA Cyprus. Its initiative in hosting the event paid off superbly.”

More than 40 people, mostly women of mid- to senior-level management rank, attended the seminar. It centred on investigating leadership performance through Harvard Business School-style case discussions. Participants were presented with examples of positive leadership activities “that facilitate excellence in collaborative group processes, and which prioritise creativity that leads to innovation.”

Attendees were taken through exercises to enable them “to increase awareness of personal leadership tendencies” and were invited to share their experiences and ideas. Together, they looked at leadership both as an external influence on group processes and as a dynamic, negotiated activity within group processes. The whole was seen as expanding their repertoire of strategic behaviour and actions in conducting leadership.

WISTA Cyprus is preparing to celebrate 40 years of WISTA in style. At the September 2013 meeting of WISTA Cyprus, national association president Despina Panayiotou Theodossiou announced that the theme for the 2014 international annual meeting and conference, to take place from October 8-10, would be “Shipping Connects.” The dedicated conference website wistacyprus2014.com was activated immediately following the 2013 WISTA global conference in Montreal.

Ms Rosberg said: “Despina, as president of WISTA Cyprus, is an inspiration to all young women who aspire to build a career rather than just ‘having a job, ’ and is conscious of the important work that WISTA has done from the beginning in bringing female shipping professionals to the forefront of this changing industry.”

The WISTA Denmark president declared: “The 40th anniversary milestone is an additional reason for all to attend WISTA International Conference in Cyprus in 2014.”

The event was sponsored by Deloitte and Deep Blue Insurance Brokers and was hosted by Interorient.

Seven steps to business success in the USA…