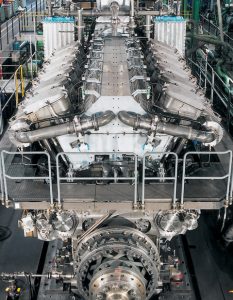 MAN Diesel & Turbo has won the order from Miami-based Carnival Cruise Lines to supply five 48/60CR engines for its next generation of cruise liner. The newbuilding will feature a diesel-electric propulsion system. The vessel will be built in Italy at Fincantieri S.p.A., one of the world’s leading cruise shipbuilders.
With a gross tonnage of about 133, 500 tons and a passenger capacity of about 5, 000, the ship will be the largest vessel in the Carnival Cruise Lines fleet. Its construction represents the introduction of a brand new class of ship that will be powered by five MAN Tier-II-type engines – 2 × 14V48/60CR + 3 × 8L48/60CR types – capable of delivering 62, 400 kW. The vessel is scheduled for delivery in the spring of 2016.

Dr. Stephan Timmermann, of MAN Diesel & Turbo’s Executive Board, said: “This new order is yet another historical milestone for the company in what is a technologically but also commercially demanding market. Gaining the confidence of Carnival Cruise Lines, the world’s largest cruise operator, fills us with pride but we are also aware of the high level of expectation that working with a major, new customer brings.”

Timmermann concluded: “This new cruise order for Carnival Cruise Lines is our second at Fincantieri within a rather short period of time. It clearly signals the deepening of our nascent collaboration with one of the world’s dominant cruise shipbuilders, something we view as very encouraging.”
During the evaluation period to select the most suitable engine configuration, Carnival Cruise Lines and Fincantieri paid special attention to the highest possible degree of redundancy, safety, power flexibility and reliability. The five 48/60CR engines will operate with MAN Diesel & Turbo’s well-proven, state- of-the-art, common-rail injection system that accommodates running on both heavy fuel oil and distillate fuels. This technology, developed in-house by MAN Diesel & Turbo and fully optimised for its engines, provides superior performance in terms of fuel consumption and smoke emissions, especially at part load compared to its IMO Tier II engine version with conventional injection system.

Sokrates Tolgos, Head of Cruise & Ferry Sales, MAN Diesel & Turbo, said: “We are extremely pleased with what is a very positive development for us in the cruise segment. Our company’s firm approach of risk-controlled introduction of new technologies into the market over many years is bearing fruit and fully in line with the very high safety, reliability and environmental standards demanded by the cruise business. The recently increased number of new cruise customers opting for MAN engines encourages us to maintain our focus on continuous innovation without compromise on quality and reliability. We feel honoured to welcome Carnival Cruise Lines as our new customer. This is an excitingly positive milestone for our future growth in this market, which has always been a frontrunner for environment, emission reduction, and state-of-the-art technology.”

MAN Diesel & Turbo SE, based in Augsburg, Germany, is the world’s leading provider of large-bore diesel engines and turbomachinery for marine and stationary applications. It designs two-stroke and four-stroke engines that are manufactured both by the company and by its licensees. The engines have power outputs ranging from 450 kW to 87 MW. MAN Diesel & Turbo also designs and manufactures gas turbines of up to 50 MW, steam turbines of up to 150 MW and compressors with volume flows of up to 1.5 million m³/h and pressures of up to 1, 000 bar. The product range is rounded off by turbochargers, propellers, gas engines and chemical reactors. MAN Diesel & Turbo’s range of goods includes complete marine propulsion systems, turbomachinery units for the oil & gas as well as the process industries and turnkey power plants. Customers receive worldwide after-sales services marketed under the MAN PrimeServ brand. The company employs around 15, 000 staff at more than 100 international sites, primarily in Germany, Denmark, France, Switzerland, the Czech Republic, India and China. MAN Diesel & Turbo is a company in the Power Engineering business area of MAN SE. Ref. No.: 6510-0332

Form eternal: David Bomberg paintings newly on the market, with a tribute to his wife Lilian Holt