Top Posts
The BDI drops down to 1,540; Wets maintain...
John Faraclas of All About Shipping contributes to...
Irene Rosberg addresses the 22nd Parliamentary Intelligence-Security Forum
Pamella Roland Fall/Winter 2022: Bejeweled Eveningwear
Summer is on in Astypalea!
Hot Port News from GAC
Bibhu Mohapatra Fall/Winter 2022: On the Super Heroines...
Ready to hit the water? So are these...
Coach Fall/Winter 2022: A Collection That Feels Like...
Badgley Mischka Fall/Winter 2022: Wearable Sculpture in Ultra-Chic...
Power, philosophy and heroism of central bankers, and...
New superyacht goes up in flames
American Club Circular no.23/22 – EU Sanctions –...
Home HRArt and auctions Form eternal: David Bomberg paintings newly on the market, with a tribute to his wife Lilian Holt

Form eternal: David Bomberg paintings newly on the market, with a tribute to his wife Lilian Holt

Form eternal: David Bomberg paintings newly on the market, with a tribute to his wife Lilian Holt,  By James Brewer

Considered one of the most influential British artists of the 20th century, David Bomberg is attracting growing attention. The West End gallery Waterhouse & Dodd is showing until December 7 2013 a cache of works only now released from private collections to the market – and its consequence is enhanced by the inclusion of paintings and drawings by Lilian Holt, Bomberg’s second wife.

“We were fortunate to be offered a small group of works by Lilian from two private collections and felt the link to Bomberg’s own work was too strong to ignore, ” says Jamie Anderson of the Albemarle Street gallery.

Bomberg (1890-1957) explained that his essential theme was “style is ephemeral – form is eternal.” His teaching inspired a generation of artists, including his students Frank Auerbach and Leon Kossoff, at London’s Borough Polytechnic in the 1940s and1950s, although he was not fully appreciated in his lifetime. 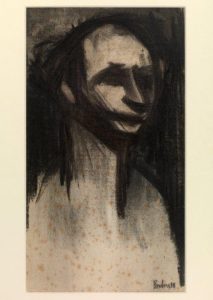 Self Portrait. Signed & dated ’38. By David Bomberg Charcoal on paper

One of the most striking pieces in the Waterhouse & Dodd selection is a charcoal portrait of Lilian Mendelson (née Holt). The work dates from the beginning of their relationship around 1928, soon after Lilian’s divorce from an antiques dealer, Jacob Mendelson.David and Lilian married much later, in 1941. The gallery catalogue describes the work as “an affectionate and delightfully informal portrait of a woman whose support, both emotional and financial, enabled Bomberg to continue working through the darker days that lay ahead.”

Lilian (1898-1983) trained at Putney School of Art in the early 1920s. The first of the three portraits of Lilian by Bomberg in the Tate is charmingly titled Lilian painting David painting Lilian. It is clear that she put his career before hers to become his ever-supportive guide, laying aside her artists’ equipment for many years. It was only in her early 70s that Lilian had her first solo exhibition. After Bomberg passed away, she reverted to using her maiden name Holt.

The Waterhouse & Dodd catalogue says that Lilian’s painting Tinehir Atlas Mountains, Night, shows an artist who was clearly indebted to her mentor, but who displayed considerable technical gifts of her own. Most of the private gallery’s selection is from the estate of Bomberg’s grand-daughter, Natalie Tachuk. 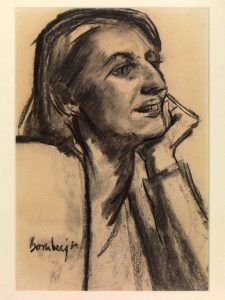 Born in Birmingham to Jewish immigrant parents from Poland, David moved at the age of five with his family to Whitechapel in London, and enjoyed some of the finest arts tuition. He was part of a ‘golden generation’ at the Slade School of Art which included Stanley Spencer, Paul Nash, Mark Gertler and other young artists destined for fame. Before World War I he was prominent in the avant-garde Vorticist movement, which was populated by figures such as Jacob Epstein and Henri Gaudier-Brzeska and introduced radical, near-abstract forms attuned to the machine age.

One work that reflects the Bomberg mantra of “style is ephemeral – form is eternal” is Bargee and Canal Bankwhich is signed, titled and dated 1921 in Lilian Bomberg’s hand on backboard. This gouache on paper work “combines the new compositional forms the artist conceived in the post-war period with the striking colouring more often associated with his pre-war work, ” says the catalogue. “Through the use of strong blocks of primary colours, the artist is able to reduce the component parts of the composition to pure form, and thus place an emphasis on structure rather than the production of a purely representational image.” 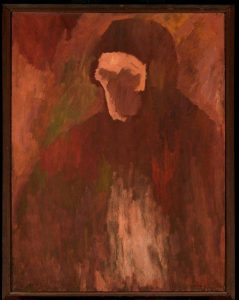 The Franciscan. Oil on canvas. Signed & dated ’54. By David Bomberg

His Bargee Theme works are based on wartime recollections of the canals in Flanders. He was inspired to paint these scenes after being struck by similarities with the Thames-side pathways where he and his first wife Alice used to cycle.

One of his last masterpieces is the oil painting The Franciscan,  executed while he lived in Ronda, Spain, its sombre mood said to reflect the despair he felt at his achievements being insufficiently recognised. Despite the title, it is a self-portrait. As for many years, Lilian was by his side to encourage and advise him in the way he presented this and other ‘imaginative portraits’ for a Bond Street exhibition in 1955.

Self-portrait. Oil on board. By Lilian Holt.

Bomberg will remain in the public eye for a long time to come. A major BBC programme on him is scheduled for early 2014. Sarah MacDougall and Rachel Dickson, senior curators at Ben Uri, the St John’s Wood gallery which holds “the most distinguished body of work by artists of European Jewish descent in the world, ” are preparing a monograph on his work, for publication in 2017.

London South Bank University, the successor institution to Borough Polytechnic, has regular exhibitions of Bomberg and the Borough Group at its Borough Road Gallery, the permanent home of the Sarah Rose private collection of works by Bomberg and his pupils. The Tate staged a Bomberg retrospective in 1988.

On November 21 2013, Christie’s offered 32 works from his estate, with proceeds going to the Hadassah Medical Organisation in Jerusalem. The paintings and drawings came to auction for the first time via his dealer, Fischer Fine Art.

Bridge Energy to be delisted from Oslo Børs

Many thanks for interesting article, always nice to hear from you