It was once “the highway to hell, ” a chain of fiercely contested European battlegrounds in the final 12 months of World War II. Now its course is to be celebrated as a pathway for peace, economic activity and tourism.

What has been named Liberation Route Europe has been created to follow the trajectory of the Allied forces as they attempted to smash Nazi domination of large swathes of the continent, an offensive that has its 70th anniversary in 2014. 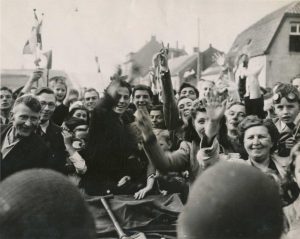 The project has won substantial backing from interests throughout former enemy combatant nations, to join in aconsortium to develop and market related activities. Partners along the south coast of England (including Brittany Ferries and Hampshire county council), and Normandy, Paris, Ardennes, North Rhine-Westphalia and Berlin, are collaborating to roll out the Route.

As full commemorations of D -Day and Operation Market Garden approach, special events including museum exhibitions, tours, educational courses and ceremonies are being organised to retrace the terrible realities of war. Among the initiatives, the Liberation Route Europe Foundation is collecting as many stories as possible from Allied and German soldiers and refugees who experienced the bitter final 12 months of the conflict.

The Route starts with the maritime connections of southern England and includes the Normandy beaches, Brabant, Nijmegen, Arnhem and the Veluwe region, and onward towards Berlin.  It will feature strongly in the 2014 tourism campaigns of the various countries, organisers made clear in presentations at the big London autumn event, the World Travel Market, in November.

The Liberation Route Europe Foundation heralds what it sees as a unique opportunity to understand the importance of freedom and unlock a deeper understanding of history from different national perspectives.

Jurriaan de Mol, chairman of the foundation, has compared the route to “a second Santiago de Compostela, a European Freedom Trail.”

Its origins are in the establishment by the city region of Arnhem Nijmegen in September 2009 of the Liberation Route Project, which quickly attracted an annual rate of some 30, 000 visitors. Its extension across northwest Europe looks sure to boost that total considerably, as some of the individual sites such as the Normandy beaches have for years welcomed huge visitor numbers.

A key date will be June 6 2014, the anniversary of Allied troops landing in Normandy, although it took two subsequent months of heavy fighting to break through German defences and allow further solid advance.

There will be particular emphasis too on September 2014, for exactly 70 years earlier the Allies launched Operation Market Garden in an optimistic attempt to end the war by Christmas of that year,

Drawn up by Field Marshal Montgomery, the offensive derived its name from its massive airborne landings (market) and an infantry advance (garden) from Belgium, through north Brabant towards the Maas, Waal and Lower Rhine rivers. His strategy was to bypass German defences along the Siegfried Line and to neutralise V2 launch sites in the west of the Netherlands. British, Polish and American airborne troops were ordered to take the bridges over the three Dutch rivers, but a drawn-out assault lost the element of surprise. The operation was successful, at a heavy cost, in liberating Nijmegen and large parts of North Brabant, but failed to take Arnhem.

There was also much fighting in Flanders in an effort to seize the port of Antwerp so that supplies could be landed. It was another five months before Operation Veritable and the start of the Rhineland Offensive – described as a battle to rank alongside Stalingrad, Normandy and Berlin – brought the war to a conclusion. Winter had brought the misery of famine and extreme cold for civilians, and the destruction of the Betuwe through deliberate flooding.

Along the Liberation Route more than 80 locations are each being marked symbolically by a large boulder, where visitors will be encouraged to stop, to download audio stories about civilians and soliders who lived and fought nearby, and check information about nearby memorials, museums and cemeteries. Details like this can be accessed from any location through the website www.liberationroute.com. A note on the site says: “How you follow the Liberation Route it entirely up to you. You can walk it, cycle it, drive it or take the bus.”

Financial support from the Dutch vFonds (National Fund for Peace, Freedom and Veteran Care) and endorsements from community leaders and leading politicians, including Martin Schulz, president of the European Parliament, who is patron of the foundation, have given the work a considerable impulse.