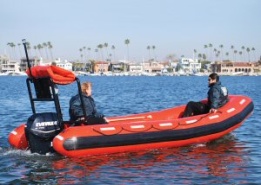 Under the contract, awarded by the U.S. Army Contracting Command in Warren, Michigan, Willard Marine will deliver 16-ft. rigid-hull inflatable boats (RIBs) for eight Logistic Support Vessels (LSV) and 34 Landing Craft Utility (LCU) vessels. The boats will be built at the company’s plant in Southern California. Deliveries will take place between March and August 2014.

The Willard Marine SEA FORCE® 490 SOLAS OB RIBs are powered by Evinrude lightweight 40 hp E-TEC outboards and have a capacity for up to six passengers. The boats are certified by the U.S. Coast Guard to meet the provisions of the international Safety of Life at Sea (SOLAS) treaty.

Willard Marine offers a range of 4.9- and 6.7-meter SOLAS-compliant boats for commercial and military vessels.

About Willard Marine
Headquartered in Anaheim, Calif., Willard Marine was founded in 1957, and is recognized as a leader in the design and construction of high-quality fiberglass/composite and aluminum boats for military, homeland security, commercial, law enforcement, SOLAS and other market segments. The company is privately held.

The Markets: “Coming” up but be more cautious