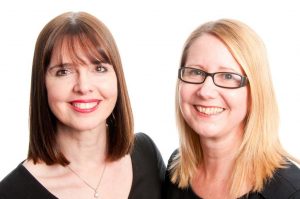 All go at the London Art Fair  2014 – a young gallery from Grimsby takes its wares to the capital,  By James Brewer

A go-ahead gallery that is the pride of a seaport town 230km from the capital is set to make a splash at London Contemporary and Modern Art Fair, being staged at the Business Design Centre, Islington, from January 15-19 2014.

From Grimsby – which with Immingham forms what is said to be the UK’s largest port by tonnage, handling up to 55m tonnes of cargo a year – two arts enthusiasts are proving that there is vibrant artistic life way beyond London.

Gill Hadwin and Elaine Munson, who run Abbey Walk Gallery in the east coast town, say that they are exhibiting “some exceptional artists” at the prestigious London fair, which has its 26th edition this year and will feature around 100 galleries and other stands.

Why operate a gallery in Grimsby (a town believed to owe its name to Grim, a Viking fisherman)?

Gill told us: “Elaine and I feel very privileged to run a contemporary art gallery in Grimsby – not the most obvious of places to open a [commercial] gallery– the town does not have a public gallery, although it has quite a substantial art collection.

“However, Grimsby does have a successful art college – the East Coast School of Art and Design – that is now 130 years old, and which is where Elaine and I met as mature students doing our Fine Art Degrees.” 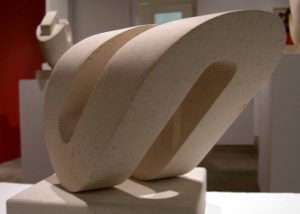 She continued: “We do have to work very hard to promote what we do and often try to think outside of the box – for example, in the past year bringing [US-based] David Eddington to Grimsby straight from an exhibition in New Orleans; placing five large-scale contemporary steel sculptures into our local shopping precinct creating Grimsby’s first sculpture trail; and physically presenting work to an audience who in the main are unused to viewing contemporary art in any form.

“In 2013, we launched GO – Grimsby’s first Open Art Competition. Of course being prepared to move outside of Grimsby and exhibit at places such as the London Art Fair we promote our artists, the gallery and in doing so the town itself.

“We have also worked with the Arts Council and shown works from their collection which although are not for sale again offers the opportunity for our local audience to view world-class art. On these occasions, we encourage schools and colleges to visit and view the works– often offering accompanying workshops and talks.”

Describing how  the gallery maintains its buzz in the Lincolnshire town, Gill added: “We change exhibitions every four to six weeks and we have nine professional artists who have studios at Abbey Walk Gallery, so we hope we are creating an energy that is always exciting and somewhere there is always something different to see.

“Why do we do it? Elaine and I are both artists and we never know who will walk through our gallery doors – but every day we meet the most interesting people. Most importantly we both fervently believe that art can change lives – it always lifts the mundane.”

Grimsby has been a significant fishing and bulk port since the 12th century and has gone through several trading cycles. In the 1950s it laid claim to be the world’s biggest trawler port, but the UK’s Cod Wars with Iceland crushed much of the domestically-based fishing industry. A member of Associated British Ports group, it now has a key part of the seaborne vehicle trade: ABP is investing £25m to develop Grimsby River Terminal to handle the largest car carriers.

Stephen Newton, who has exhibited extensively throughout Europe, America and the UK, has been a strong supporter of Abbey Walk Gallery. An acclaimed artist, he is also an author with a distinguished academic career as an expert in psychiatry. He had the gallery’s inaugural one-man show in December 2008.

Stephen uses thick layers of texture, buying his oil paint by the litre. His works “deal in unconscious form, portraying compelling elemental images – odd objects and parts of buildings, walls, staircases, chairs and windows, images that are raw and uncompromising, a reminder to the viewer of how buildings encapsulate our hopes and fears on many levels, ” according to a note by the gallery.

Another oil painter, Paul Galyer, says in his artist’s statement: “I incorporate the liquid flowing properties of paint itself along with photorealist representational pairing of liquid forms.” 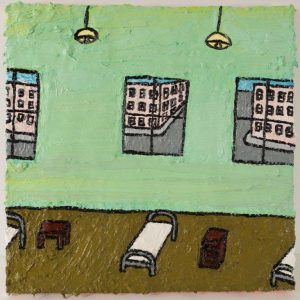 David Eddington, according to a review by Stephen Newton, has in his mixed media output depicted recently “monolithic, soulless, faceless, cold, metallic icons, so often central edifices in a barren, empty, fearful void, [that] speak of an inhuman electronic cyber world of Big Brother, devoid of real contact or compassion and always on the edge of violence.” Boats and water have always been close to David’s heart, as seen in a series of water and power paintings, and a series of bridge paintings. 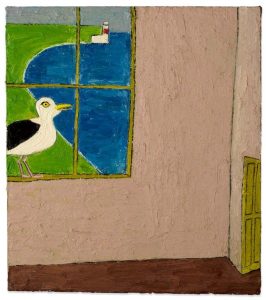 Seagull by Window. Oil on canvas. By Stephen Newton

Abbey Walk is further showing in London geometric sculptures by Michael Thacker, a master stone mason who works full time at Lincoln Cathedral. The architectural influence of his working environment is apparent in his beautiful sculptures, says the gallery, and his recent work illustrates his new investigations into using light: he applies gilding to reflect or accentuate light or create a glow exuding from the centre of the stone.

Elaine Munson makes sculptures that involve “the metamorphosis of materials which are fascinating, yet ordinarily overlooked. Whether I am working with wood, stone or metal, to become engaged with the material and the process of making is inherent.” Additionally, she makes paintings and drawings on canvas, metal and paper layered with oil paint, graphite and chalks. 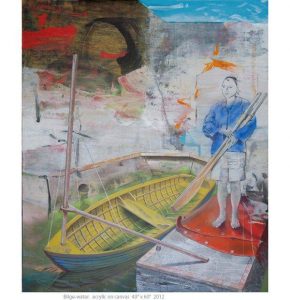 Gill Hadwin’s paintings “create a partial narrative, giving a sense or intimation of place without telling an explicit story.  I attempt to construct environments that loosely play with architectural shapes and forms.”

Hello James. it was lovely to see you again at the London Art Fair 2015. So pleased you got to meet the artist Linda Ingham