The Start of the Race. Oil on canvas, 1962. By Konstantin Molteninov. Courtesy of John Barkes

Power, grace, determination – these are among the qualities certain to be displayed by competitors at the Sochi Winter Olympics, which are under starter’s orders for February 7 2014. They could just as well describe the attributes of many of the 20th century Russian paintings that are fast winning a new popularity.

UK art dealer John Barkes, who has travelled to Russia for more than 20 years to buy works from artists and their families, says: “They are among the best traditionally trained artists in the world, and the best of them were capable of astonishing work.” Mr Barkes has been showing examples of such works which radiate dedication and humanity, at venues such as the Winter Decorative Fair (January 21-26) in Battersea Park, London. 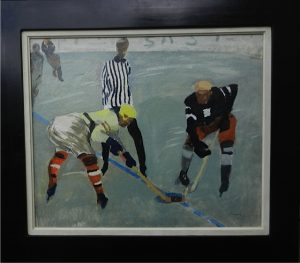 Ice Hockey Match. Oil on board, 1960. By Leonid Mironov. Courtesy of John Barkes.

Sotheby’s has latched on strongly to the importance of the period to the modern art world: the auction house staged an exhibition under the title Soviet Art Soviet Sport which was on view in London until January 14 2014, and is transferring to Moscow in February to be enhanced by loans from state museums. It was the first international initiative involving the Institute of Russian Realist Art and was sponsored by privately-owned Promsvyazbank to bring together 35 paintings, sculptures and drawings from the collection of the Institute.

All this gives a timely boost to the celebration of the Russian-British Year of Culture 2014.

Mr Barkes is currently showing paintings by members of the (formerly Leningrad) St Petersburg Artists’ Union mainly from the 1960s and 1970s.

His current top artists include Konstantin Molteninov, born 1924, still going strong; Oleg Koren (1933-1993); and Vitali Tyulenyev (1937-1990s). Several of the artists who painted sporting subjects were competent sportsmen themselves. Konstantin Molteninov won cross-country ski races in his prime, and proudly talks of his trophies. Vitali Tyulenyev was an alpine skier and a climber. 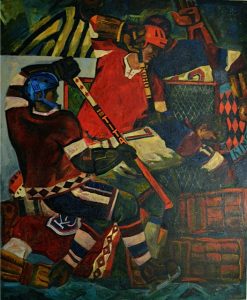 Mr Barkes notes that the economic system introduced in 1990 has produced “New Russians with New Russian money.” Sales of Russian art at the international auction houses are major events, and prices for certain categories have skyrocketed.

On the other hand, nouveau riche buyers have up to now shown little interest in the artists who worked for the USSR, the Socialist Realist painters and sculptors of the Artists’ Unions. They became unfashionable, associated with the previous regime and a passé generation.

The State Russian Museum in St Petersburg even closed its Socialist Realism department. Academics and gallery dealers were even more scathing than auction buyers.

Professions such as writers and artists had led lives of privilege under the Soviet system. Once elected to membership of a local artists’ union, a person would in due course be given a studio and artists’ materials, an apartment and a salary. At the end of the Soviet system these artists were allowed to keep their apartments and sometimes their studios with contents, but state patronage ceased. Their work was out of fashion, and the lifeline was interest from abroad.
This meant that dealers like John Barkes were able to visit and buy from these formerly prominent artists in their studios. Such output could then be sold in the west for their intrinsic appeal, or put into store in expectation that times and fashions would change, and moneyed Russians might come looking for this material.

“The exhibition at Sotheby’s and the existence of the new private museum in Moscow that provides the exhibits, and the sponsorship of a major bank, are sure indications that this change might just be taking place, ” said Mr Barkes.

He was especially impressed during his visits to St Petersburg by the preparatory sketches that artists had kept and which “were a revelation. They were certainly the basis of the interest I have maintained over the last 20 years of buying them.”
Works with sporting themes seem to stand apart from many of the other paintings that critics had dismissed as mere propaganda, whatever the artistic merits of the canvases. In fact, vast amounts of money are spent by many governments on big sporting events, in a bid to win popular acclaim.  This has been the case from the 1936 Berlin Olympics in Nazi Germany onwards, Mr Barkes observes. The bureaucracy in the USSR was just as quick to wield sport as a weapon that might forge cohesion around the prevailing ideology. 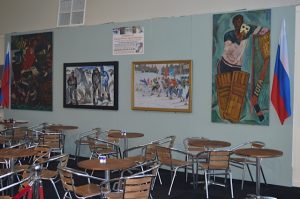 Set in a sporting context, propaganda can be exciting and stir the masses. In turn, paintings of sporting events are rarely seen as propaganda, but as depicting thrilling feats of human endeavour. Artists seemed fairly comfortable portraying sports, for in doing so they felt that they had the latitude to go beyond what would have been unacceptable in other genres to the Stalin regime.

Mr Barkes says that his engagement with depictions of sporting prowess is down to chance: “It just happens that most of my best St Petersburg paintings are of this subject.”

The  Olympic Flame for Sochi was lit on 29 September 2013 in Olympia, the Greek birthplace of the ancient Games. Greek actress Ino Menegaki in the role of High Priestess asked the god Apollo to send the sun’s rays to light the flame. She handed the torch, and an olive branch signifying peace, to the first relay torchbearer, the Greek alpine skier Giannis Antoniou. He passed the torch to ice hockey player Alexander Ovechkin who became the first Russian torchbearer of the 2014 relay. After a seven-day journey across Greece and on to Russia, the relay started again in Moscow. The Olympic torch reached the North Pole for first time, courtesy of the nuclear-powered icebreaker 50 Let Pobedy and there was another first, a call at the International Space Station.

At the Works on Paper fair at the Science Museum from February 5 to 9, John Barkes will show watercolours by Georgi Kovenchuk, one of the best known artists in St Petersburg, and 20th century works acquired elsewhere in Europe.

Mr Barkes can be contacted via www.lacygallery.co.uk

Global Risks – the next ten years