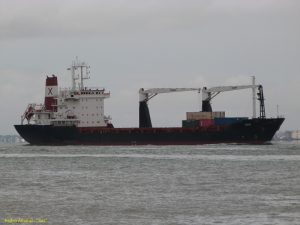 23 January 2014 – The ITF has initiated arrest proceedings on behalf of the crew of the Marshall Islands-flagged M/S Isis, which is moored at Tilbury, England and whose crew are owed at least USD130, 000 in pay. The decision to arrest the vessel follows the delivery of a written warning to Athens-based company Derna Carriers over its negligence and evasion of its responsibilities.

ITF UK and Ireland coordinator Ken Fleming explained: “A visit to the Isis by myself and my colleague Darren Procter revealed that crew members had been unpaid for months. On the 3rd January Derna had sent an email to the ship stating clearly that all money would be paid to the full crew by the 7th January. This did not happen.

“Since then, the company has utterly failed to abide by its responsibilities. A few crew members have received paltry payments since our visit on the 7th January – which I am sure was done to confuse the ITF and make it look like the crew were not telling the truth. The situation remains that most of what is owed dates back to the 1st November – some two months and three weeks, and is clearly not forthcoming. This is totally unacceptable.”

He concluded: “I have been advised from the ship that all crew want to go home. The company’s litany of broken promises has left them feeling that no future exists for them on board the Isis, and they have decided to seek repatriation on the grounds that Derna have clearly breached their employment contracts. Given that the situation is deteriorating by the minute we have now moved to have the vessel arrested on behalf of the crew – quite simply no other course of action can now be taken, and the company will have to live with the costs and consequences of its own actions.”