South Korean-born Song-Nyeo Lyoo is chosen from hundreds of hopefuls to win first ArtGemini Prize in London for painting,  By James Brewer

An artist born in the South Korean seaport city of Busan, and now resident in Germany, has won London’s first ArtGemini Prize for painting, in a competition which attracted a total of 744 painting and photography entries from 33 countries.

Song-Nyeo Lyoo was warmly congratulated as the result was announced at a private view of shortlist winners at Fitzrovia’sRebecca Hossack Gallery. Ms Lyoo won the prize of £2, 000 for her work Haus #06, completed in 2013. It is a fantastical study in ink, colour and gold powder on rice paper, from her series entitled in German Sehnsucht , which means yearning.

Song-Nyeo Lyoo executed the piece in a style she has used in one of her other key series, that depicts a contemporary version of a Buddhist paradise. Her winning submission is a sensual riot of colour over four panels which suggests the interconnectedness of life, nature and architecture.

Ms Lyoo studied art in her native country and in Germany, and lives in Frankfurt. She has exhibited in London, Germany, the Netherlands and South Korea, and this is the fifth award of her career for her painting.

Her success marked the inauguration of the ArtGemini Prize, which is distinguished by its international outlook in promoting contemporary art, and is open to all emerging and established artists. It was set up by London fine arts enthusiast and entrepreneur Jimmy Lek, previously founder of ArtChinese. Mr Lek is well known to visitors to leading events including the Affordable Art Fair,   20/21 International Art Fair and Bloomsbury Art Fair, all in London; Windsor Contemporary Art Fair. He organized the exhibition Animal Kingdom, paintings by Li Fuyuan, at the Museum of East Asian Art, Bath.

At the ArtGemini 2013 event, second prize for painting went to Rene Gonzalez for his acrylic  Painter’s Studio. The 160cm by 90cm canvas presents a construction teeming with images, and guarded by two formidable felines.

Highly commended was Jingxuan Hu  for her resplendent water-colour Indulge Me . A graduate of Central Saint Martins, London, the prolific Ms Hu describes herself as “a graphic painter and graphic novel artist. Art… helps me explore ideas around flux, migration, urban-life with aesthetic codes as markers of identity and aspirations.”

Photography first prize went to Chiara Gerevasi for her large C-type image UNO. Ms Gerevasi is a freelance photographer, keen on architectural subjects.  Born in Milan, she was raised in South America, studied at the New York Institute of Photography, and is based in Copenhagen.

Second prize for photography was awarded to Israel’s Orit Zuckerman for an untitled work, typical of his surrealist approach, from 2013. Highly commended was David Gould for Melee, a digital print on board.

The exhibition continues till February 7 2014, and visitors can vote for their favourite work to win the Public Choice Prize. In all,  a cash fund of £5, 000 is going to winners across the three categories of painting, photography and public choice.

The judges’ panel for this independent competition was chaired by London-based Sajid Rizvi, founder and publisher of EAP Group International Media; Rebecca Hossack, an important figure in contemporary art, with three galleries in London and New York featuring craft as well as fine art; and Vanessa Champion, an art photojournalist and writer, and director of the creative agency Dragonfly Communications.

No title, photography by Orit Zuckerman

Mr Rizvi said that “freedom of choice” was amply reflected in the prize title ArtGemini. “As those au fait with western astronomy and zodiac will know only too well, Gemini is one of the four mutable signs symbolising positivity and air.” It was “no coincidence that both Greek philosophy, starting with Empedocles in the fifth century BC, and Asian thought pre-dating Buddhism, put much store by Air, alongside Fire, Water and, of course, Earth.”

All 56 artworks in the shortlist exhibition are for sale, and 20% of the proceeds will be donated to the charity Kids Company.

Mr Lek and his co-workers are already starting to build support for the second edition of the prize, ArtGemini Prize 2014, scheduled for launch in May 2014, and are looking for further patrons, sponsors, ambassadors, selectors, and helpers. 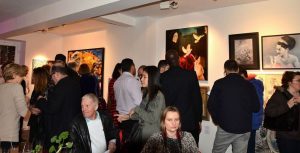