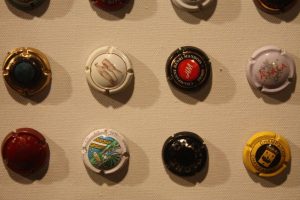 Thirteen is a lucky number at the intriguing gallery Studio Sienko, just off London’s trendy Borough High Street, south of the Thames.

A baker’s dozen of edgy artists who use a variety of media are boldly brought together in the latest presentation at the gallery, which was founded by versatile artist, printmaker and ceramicist Olga Sienko a little over 20 years ago.

Scanning the exposed brick walls hung with the eclectic mix that comprises Symbolism in Abstraction,  viewers do a double-take as they discover that one of the perkiest portrayals is a cheeky parody of a Damien Hirst hallmark. 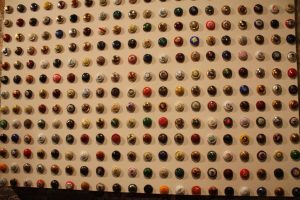 The sally is typical of the resourceful Catherine Shakespeare Lane, who does not mince her meaning in her metal on canvas piece entitled Piss Artist. When she says metal, this refers to some 240 bottle tops and corks mounted symmetrically on a panel. This endeavour was, she says, created as a riposte to Damien Hirst’s spot paintings – which consist of rows of coloured dots usually painted by his assistants – reflecting the time before he gave up drinking in 2002.

Ms Lane collected champagne stoppers and other caps over three years from The Colony Room (a drinking club in Dean Street, Soho, favoured by some of the Young British Artists including Hirst), the French House pub (another Dean Street haunt), from outside her north London studio The Monsell Stores, and from various watering holes.  Ms Lane is of the school of what is sometimes called modern archaeology: re-using stuff thrown away and other found objects. She says that “today’s rubbish is tomorrow’s art.” 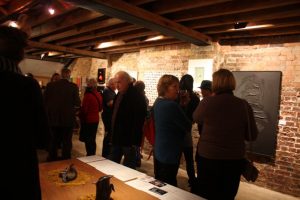 Warsaw-born Olga Sienko has been a friend to aspiring talent on the London arts scene since arriving in the capital on a fellowship to the Slade, where she worked in the printmaking department, before continuing to the Central School of Art and Design, and the academy that probably had most influence on her, the Royal College of Art.

Working among up-and-coming names inspired her to open her own gallery, with special emphasis on the sometimes neglected genre of printmaking. Her Studio Sienko gallery in Lant Street is near where Charles Dickens lived as a child, and it is a fascinating building.  It had been for 150 years a carpenter’s workshop – and the sturdy exposed beams in the ceiling recall those artisanal days. 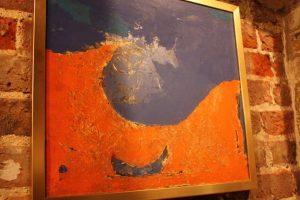 In all, she has put on at Studio Sienko more than 70 shows with artists of greater and lesser fame, and for the past nine years there has vigorously championed life drawing for students, with a brief interval when the classes where taught in the crypt of St George the Martyr close by in Borough High Street.

Multi-lingual Ms Sienko, who had earlier studied interior design, graphics and etching at the Academy of Fine Arts, Warsaw, continues to produce a variety of work herself.

Among works on show in the new exhibition were six by the painter and greatly respected teacher John Barnicoat, who sadly passed away in September 2013. They served as a reminder of his eminent career. He had been brought up in Cornwall and loved to sketch Cornish landscapes, a passion that remained throughout his life. Such landscapes were some time back exhibited and well received at the Molton Gallery in London, and in Paris at the Galerie Colette Allendy. 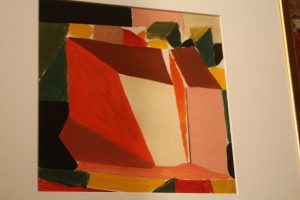 Red/brown. Gouache on board. By John Barnicoat

To be seen now is John Barnicoat’s small, framed Cornish View in pencil and watercolour, dating back at least 60 years.   A landscape with arches was painted in egg tempera in the 1970s as part of a series he showed between 1977-83 at the Taranman Gallery, which was located near the Victoria & Albert Museum. Mr Barnicoat exhibited work at the Taranman until the death of its owner Christopher Hewett.

As a 17 year old school-boy John Barnicoat volunteered for the Navy, and served aged 20 at Sword Beach during the D-Day landings.  After the war he studied modern history at Oxford, and attended the Ruskin School of Art.  This led to studies at the Royal College of Art and later to his becoming senior tutor in painting there, just one appointment in a long, distinguished career as a much admired painting tutor.  He was for a time head of Falmouth School of Art, and in the years leading to his retirement head of Chelsea School of Art 1980-89. 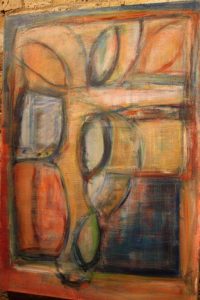 His wife of 48 years, Allie, is archiving his substantial portfolio of depictions of London bridges and other subjects including portraits, and pen and ink drawings. Mr Barnicoat was invited by Thames & Hudson in the early 1970s to write a book,  A Concise History of Posters, which was translated into several languages and has run to many editions.

Elsewhere in the Studio Sienko show, Marta Boros displays her sensitive moulding of forms with her two ceramics Coatand Tree. Marta is having a busy time: she is one of 11 artists chosen for the exhibition Figuratively Speaking at Espacio Gallery from February 20-25 2014 – which Espacio says “reflects a shared visual understanding of the world as an exciting place to be explored and represented, with inventive styles and varied and powerful imagery.” Espacio is at 159 Bethnal Green Road, London, E2. 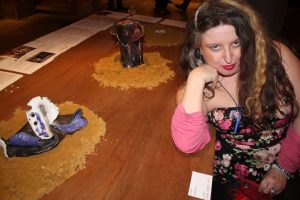 Marta Boros with her two ceramics: Coat, and Tree.

Meanwhile, at Studio Sienko, Vincenza Orofino, earlier in her career a graduate of Central Saint Martins, lets viewers interpret her works as they sees fit.  One speculated that her duo of acrylic works on canvas,  Old Dreams, drew its inspiration from summertime. For others, the symbolism remained subsumed in abstraction…

Symbolism in Abstraction exhibition is at Studio Sienko, 57A Lant Street, London SE1 until March 29 2014.