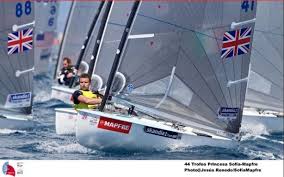 South east winds reaching 20 knots and regular three metre swells on the race courses closest to Club Nautico s’Arenal were a strong contrast to the light fickle breeze on the race courses by C.M. San Antonio de la Playa on the other side of the bay.

With strong breeze present for the six classes that raced it made for an exciting and intense day of racing.

2013 49er World Champions Peter Burling and Blair Tuke (NZL) came to the forefront on the first day of gold fleet racing and moved into the lead.

The Kiwis had a slow start to the day finishing 15th but bounced back with double bullets to go seven points clear of David Evans and Ed Powys (GBR).

“This is my first time here [Mallorca] so it’s quite a change and we’re quite enjoying it, ” commented Tuke after racing. “It’s been good fun racing in the first day of the gold fleet.

“It’s great competition here and it draws a lot of the top 49er guys and we’ve had some great racing over the last three days.”

Burling and Tuke have been balancing several projects and recently signed on with Emirates Team New Zealand for America’s Cup and Extreme Sailing Series adventures but Tuke has relished going back to the team’s 49er roots, “We haven’t raced in a big fleet since the World Champs so we’ve just got to keep ticking over. We’ve got a lot on our plate now with different things so we have to keep our hand in the 49er.

“We love it, it’s great fun and you don’t get much more fun than that today.”

Dylan Fletcher and Alain Sign (GBR) took the day’s opening race win and sit down in fourth. However it’s compatriots Evans and Powys that are the leading British duo out of the six that made the gold fleet and Powys was content with his day, “We sat out there for a little while waiting for the wind and when it came, it came in quickly. We had some big gusts out there. Some people got flattened by a few but we managed to nurse it round with some middle of the road results and a good one at the end which is good. We needed it.”

Martine Grael and Kahena Kunze (BRA) continue to epitomise consistency in the 49erFX having taken a bullet and a second from two 49erFX races.

After racing Grael said, “We had a very good day. It was tricky conditions with shifty winds coming from the shore. It was very difficult to sail but we managed it quite well in the end.”

Grael and Kunze are 12 points clear at the top of the leader board and ahead of the fourth day Grael won’t be changing her approach to racing, “It will be the same as every other day. We’ll just try to sail our race, do what we should and not worry about anything else.”

Jena Hansen and Katja Salskov-Iversen (DEN) took the second race bullet followed by the Brazilians. Denmark’s Baad Nielsen and Thusgaard Olsen came through in third and move up to second overall.

“Today was a turn for the better for me, ” said Scott. “I got two firsts which was clearly very good for me. It was needed because the Frenchman Thomas [Le Breton] has been sailing really well for the previous couple days and he had put a bit of a gap on the fleet and that’s closed right up now so I’m happy.”

Thomas Le Breton (FRA) had the lead coming into the third day of racing but was unable to bring his light wind form into the strong breeze. A 12th and an eighth sees him drop to second overall but is just a point behind the leader Scott.

Deniss Karpark (EST) retains third overall on 31 points and recognised the strength of Scott in the two races, “It was tough racing today with strong winds and gusts. I was not so strong and Giles was very fast today. He showed us a good performance and we need to improve.”

After a shaky start Mat Belcher and Will Ryan (AUS) have moved to the top of the Men’s 470 after a steady day on the water.

On being back at the top of the leader board Belcher said, “It’s great, we’re obviously very happy but for us it’s not so much about the result, it’s more about the performance. We’re feeling comfortable with how we’re going. We had a difficult first day which has seen us battle out with everyone. We’re looking forward to the final races and the Medal Race.”

The Australians picked up a UFD on the opening day which they’ve discarded meaning they’ll have to tread carefully for the remainder of the week, “When you have a UFD it makes the rest of the regatta quite difficult. Any mistakes and we can be quite heavily penalised.

“We’re just focusing on each race as it comes and try and minimise any of those mistakes. It’s hard with the conditions being so variable but it’s the same for everyone and you try and do the best that you can, be tolerant, be patient and hopefully be there at the end.”

Fantela and Marenic won the day with a bullet and a third whilst the day’s other race victory went to Matthias Schmid and Florian Reichsteaedter (AUT) who are down in 23rd.

Great Britain’s Hannah Mills and Saskia Clark came out strong on the third day to move to second overall, “We had a really good day with two first places, ” explained Mills after racing, “it’s a contrast to other days which were a bit up and down but it’s been good racing.

“We’ve had a full on winter with training and this is our first big regatta back and it’s really nice to be up against the fleet seeing how everyone’s getting on and seeing how we’re getting on.”

France’s Camille Lecointre and Hélène Defrance recorded a second and a fifth to retain their lead and will approach the final few days aiming for gold, “We didn’t expect to do so well, ” said Lecointre, “we’ll play for first place now.”

2013 female ISAF Rolex World Sailors of the Year Jo Aleh and Polly Powrie (NZL) are third overall having notched up a fourth and a second.

Billy Besson and Marie Riou (FRA) were dominant in the gold fleet taking two race wins and a second to open up a healthy lead.

The current World Champions won the opening race of the day, finishing over a minute ahead of the chasing pack. In the second race Gemma Jones and Jason Saunders (NZL) had the better of Besson and Riou but the French pair were on their a-game in the final race of the day ensuring a good lead going into the fourth day.

Racing resumes at 11:00 on Thursday 3 April 2014 with the Medal Races on Saturday 5 April bringing the regatta to a close.