Greece’s statistics agency (EL.STAT.) released earlier today its flash GDP estimate for Q1 2014. The data showed a further deceleration in the annual pace of real GDP contraction to -1.1% from -2.3% in Q4 2013 and -6.0% in the same quarter a year earlier. The reading was not far from an estimate of -0.8% provided by our Greek GDP NOWcasting model in mid-March (http://www.eurobank.gr/Uploads/Reports/GDP_Nowcasting_Update-Greece-MacroMonitor_March19_2014.pdf ).

EL.STAT does not currently release seasonally adjusted data, but according to our ARIMA X-12 model, Greek GDP dropped by -0.28% on a quarter-on-quarter seasonally adjusted basis in Q1 2014, after declining by 0.70% in the prior quarter (see graph below). The flash report does not provide a breakdown into major GDP components. Yet, recent high-frequency indicators point to a further improvement in both personal consumption and investment activity during the first quarter of the year, with net exports remaining a positive contributor to GDP growth. Among others, these include, a positive retail sales volume year-on-year reading in February, a sharp rise in the annual growth of total road motor vehicles throughout the quarter, headline PMI manufacturing number above the boost-or-burst level of 50 as well as new multi-year highs in a range of business and consumer sentiment indicators.

Looking ahead, the national accounts data for the first quarter of the year support expectations for a shift into positive year-on-year real GDP growth from Q3 2014 onwards (along with a slightly positive reading for the year as a whole). 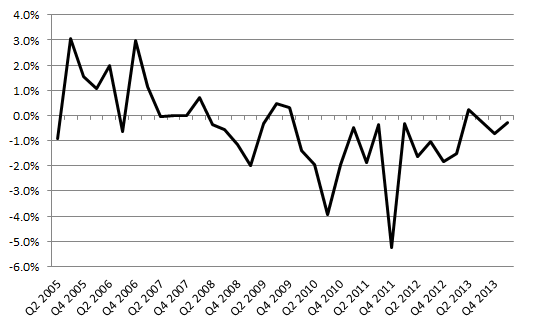