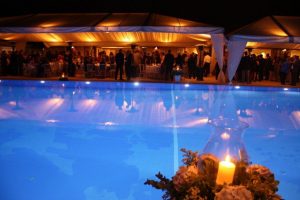 A view of Ecali Club’s pool and the right ..embankment with guests

It’s a… habit for Bureau Veritas to change venue, not only as we experience during its AGMs in Greece, but now for its Posidonia biennial reception. The interesting thing being that always the sports factor is there – from the Glyfada Golf Club in the southern suburbs of Athens, to the northern reach of the Ekali Club where the famous tennis club attracts the great, powerful and sea-wise faithful! John Faraclas and a team from www.allaboutshipping.co.uk were there to cover the event: 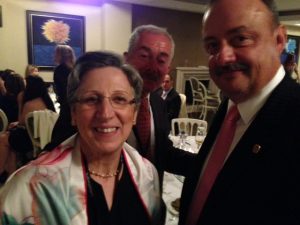 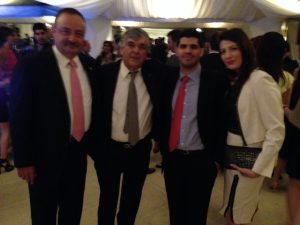 Didier Bouttier, Lambros Chahalis with Jason Therapiotis and his wife

Claude Maillot and our oldest friend in BureauVeritas, Philippe Boisson, the society’s communication director, were there too! Now, don’t ask me how 1, 500 guests made it, but I can assure you that outside in the Ecali Club neighbourhood over forty – I have counted them(!) “parking specialists” were doing their utmost to avoid havoc… and to assist the hundreds of vehicles to be parked, secure and safe!

The food was excellent par excellence; the drinks too – now who can compete with Greek wine, eh! Noticed guests going twice to the buffet area for… refuelling. Ah! the sweets too had their day, the most… honoured parties, after all both French and… les amis… greques are renowned for their sweet preferences! 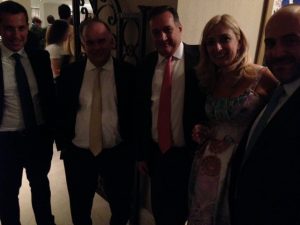 Who wasn’t there! Spotted George and Maria Maghioros, Ret Adm HCG George Stroubis, Antonis Faraklas, Markos J. Tripolitis with his wife, Mary Giouli from PMS and her husband Dimitris Toles of IMS Delfi, Jason Therapiotis with his wife and mother all from Ionian Management, Panos Laskaridis and his daughter Suzanna, Victor Restis and his wife, Goerge Sarris from the Restis Group, George Moundreas, Olga Ioannou from AGV in Piraeus, Marina Kintas, Fotis Doussopoulos – an old pal from the past and now managing director of Seamar Management Inc, Captain Costas Tsatiris from Harbor Shipping & Trading, Captain Theodore Lalas from IRI, Michalis and Evangelia Dalacouras, Loukas Darzentas from Ethniki Insurance, George Liadis and his wife Maria-Christina Ktistakis, finance and management expert Theo Polydoros, the big team from A & P Papadakis’s London office, – the majority being shipping technical executives and they were at the pool section of the Ecali Club. 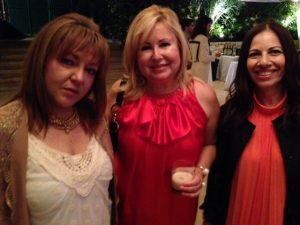 Inside the dining section we spotted Peter Pappas, Spyros Kapralos and Dimitris Kondylis -all three smiling; I guess something big is coming up, Maria Kouliga and her consultant husband Costis Pavlou. Good to meet another BV Chiot, Nikos D. Andreadis, George D Andeadis’ brother; Stefanos Altsitzoglou sales and purchase broker from SSY – Simpson, Spence & Young shipbrokers in Athens, known to the site from his London days, Dimitris Koulis from PMS, Adamantios Polemis, Paris Dragnis and his wife, Dimitris Sficas with his family and many, many others – an unending group… 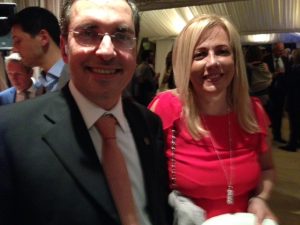 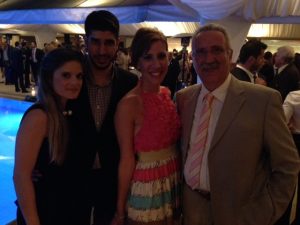 Marcos J. Tripolitis of PMS and members of his team

As has been mentioned in our news about other classification societies too, these bodies are the number one important sector in our industry and such is the competition that tonight many did not make it, as earlier on/ simultaneously as it happened, the Lloyd’s Register reception was taking place in Vouliagmeni!

Shipping business networking with focus on eco-friendly modern tonnage and the world economic crisis where the two main issues of discussion and given one of the best weather-wise evenings, no end was in the cards… The political situation in Greece and the forthcoming holidays were the second and third issues we…overheard… 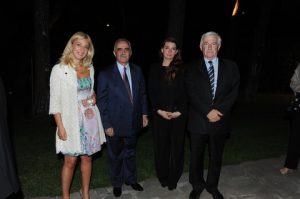 The video which follows with Didier Bouttier, food for thought; let us have your comments:

Posidonia 2014 Cup: by far, the shipping industry’s most spectacular regatta!