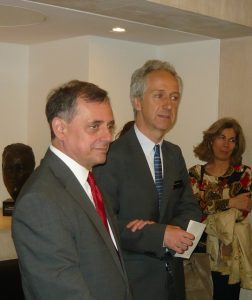 The Greek Ambassador Konstantinos Bikas and Roly Keating, the Chief Executive of the British Library

One of the best ever private views featuring a display of treasures from the collection of Greek Manuscripts with respect their digitisation took place at the British Library early last night. The event, part of various events all over Europe on the occasion of the Greek Presidency of the EU Council Ministers, was more than exceptional given the unique masterpieces of its kind on display; John Faraclas was there with his camera:

Following a dips and drinks reception, Roly Keating, Chief Executive of the British Library and H.E. Konstantinos Bikas, the Greek Ambassador, gave short speeches on the issue at the reception hall, as well as the curator,  the young Dr Cillian O’Hogan. Then guests and members of the British Library team were ushered at the adjacent room were the manuscripts where laid on display; magnificent is a poor word to use… 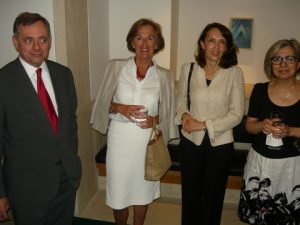 Lord Boswell of Aynho (a member of the British Greek Paliamentary Group) was there too, as did Dr Charalambos Dendrinos, Senior Lecturer in Byzantine Literature and Greek Palaeography at the Hellenic Institute, Royal Holloway College, University of London, George Lemos,   Vassilis and Mrs Tsapralis.

Among the guests spotted Bettany Hughes, aka Helen of Troy (from her best seller book), well re-known architect Dimitri Porphyrios and his wife, Count Flamburiani (Founder of the Heritage Society on Corfu),   NBG Bank’s head Stratos Chatzigiannis, Mrs. Chantal E. Mitropoulos and many others. 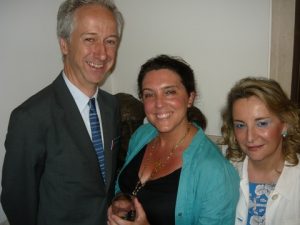 The Shipping Industry is very sensitive with respect the preservation of objects of art and heritage and has generously supported financially many projects over the last two centuries, this one being no exemption. The British Library is actively fundraising for the final phase of this digitisation, which will see the last 350 manuscripts being digitised in full and made available for anyone, anywhere to view them free of charge. We encourage our international readers to support the project by either contacting directly (as per details below) or via the website at http://support.bl.uk/Page/Promoting-Research-Into-Our-Greek-Collections The British Library and in particular this very sector will be very grateful – if donation will help reach their goal and unlock the matched funding from the Stavros Niarchos Foundation (so effectively, for every pound they receive, they will receive a pound from the Niarchos foundation, thus doubling the value of each donation).

Iwas very pleased to met and discuss relevant issue to the exhibition with some of the British Library executives participating in the exhibition, amongst them Joanna Wells, Scot McKendrick, Kristian Jensen, Chris Michaelides, Emma Johnson and the very eloquent and supportive Michele Burton. 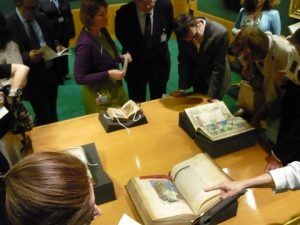 Viewers can see the program herebelow as well as Images for display, a power point presentation: