Greece: the hydrocarbons time has come! 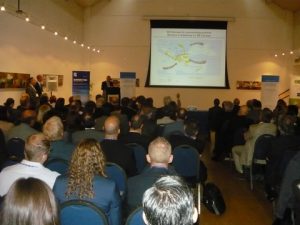 Following the success of Greece’s shipping industry where the Greek Masters of the Seven Seas for ten millennia control and will continue to control and lead the field, another sector, the third possible in terms of importance after tourism, that of energy, embarks for yet another Greek success and sparks the regional interest, not to say the global one. At a full house earlier today, at London Hellenic Centre’s Great Hall, the pre-launch event for “Greece Offshore Licencing Round 2014” took place; John Faraclas was there with his camera:

This well planned event organised by the Greek Ministry of Environment, Energy and Climate Change, well directed by Dr. George Tsifoutidis, with its specialist speakers, as well as those from PGS and BeicipFranlab. It was greatly supported by the Greek Embassy and its Economic and Commercial Section – congrats to Antonis Katepodis as well as the Research Centre for Energy Management (RCEM), at ESCP Europe Business School and GEF – The Greek Energy Forum , and hope that the event will, hopefully, be the preamble of yet another Greek success under the proviso of unity, transparency and risk assessment / evaluation in full order – ship-shape as we say in the shipping industry! 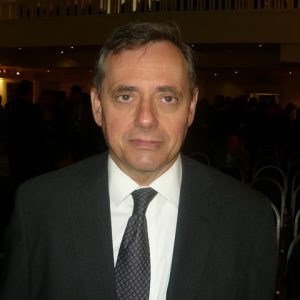 The role of moderator/chairing the event and introducing the speakers was well performed by Alexandra Sdoukou, the Director of the Greek Minister’s of Environment, Energy and Climate Change Office.

The Welcome remarks by the Greek Ambassador in London Constantinos Bikas, as usual short and to the point. The Ambassador, who is also Greece’s representative at the IMO, meticulously develops another culture, a business culture for furthering Greece’s interests in the United Kingdom and beyond.

He was followed by Yiannis Maniatis, Greece’s Minister for the Environment, Energy and Climate Change whose key note speech, if fully materialised and implemented, will make in the near future the big difference; we hope it does but needs to be appropriately safeguarded and carefully implemented, needless to say to have the Greek parliamentarians backing him as well as the Greek people, unions and organisations. Log on here  Maniatis 172014    to read in full his speech, which indeed made all of us involved in the shipping industry, more than happy, prompting us to offer him our full unsolicited support to all intents and purposes. 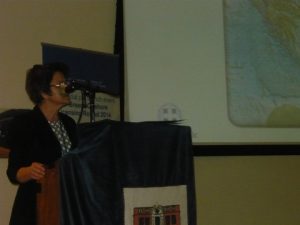 Professor Sofia Stamataki*, Director of Laboratory of Applied Geophysics at the NTUA and specialist at the Ministry, took the podium and within the thirty minutes allocated, managed to deliver the procedures of “Legal and Regulatory Framework, the Blocks and Licences” with excellent slides. One issue which we note is the appropriate concessions vis-à-vis the touristic factor of the region and hope all will go well without any hick-ups. 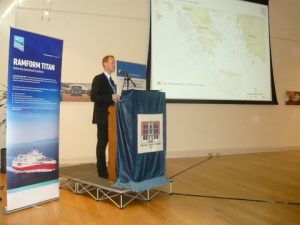 Just before the coffee-break, Oysten Lie, Sales and Marketing Manager, MultiClient – Middle East & CIA from PGS – the Petroleum Geo-Services, who sponsored the event and did all the work in the region of the Ionian Sea and south of Crete, delivered one of the best slides speeches we have recently witnessed. Well prepared and with the utmost simple Norwegian manner, he left no questions to be answered. Eager though to see “A clearer Image and results” as per his company’s cliché!

After an intense networking at coffee break  and the minister’s Press Conference at the roof-top of the Hellenic Centre, and given the first session’s warm-up, a powerful duo from the Beicip-Franlab really took us by surprise: Veronique Carayon and Bernard Colletta delivered their presentations on “The Geological Setting and Potentiality of North and Central Ionian” and the same for Crete respectively with excellent slides and in the aftermath of the event they were overwhelmed by questions from the delegates which continued during the light lunch time at the back of the Great Hall. 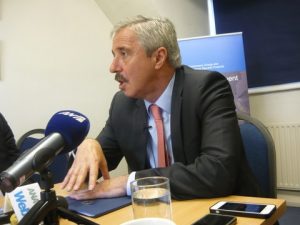 The Minister replying to questions during the press conference

All in all a great event and good to see many old friends as well as to meet new ones from all over the globe, Europe in particular. The interest of this event attracted many specialities from well management specialists to subsea logistics ones, from Auditors to managers of global supply chain in agriculture, industry and energy products to oil exploration and oil companies, from drilling to legal services and consultancy, from finance to safety and security, you name it where there. A great number of ministerial executive officers where there too headed by the Ministry’s Secretary-General Professor Costas Matthioudakis and Athanassios Zacharopoulos, deputy head of the Ministry’s Petroleum Policy Directorate.

Amongst the  esteemed delegates we spotted the Cyprus High Commissioner Euripides Evriviades and Prof. Dinos Arcoumanis who was was appointed in September 2012 Ambassador-at-Large of the Hellenic Republic with responsibility for Energy Policy and New Technologies. 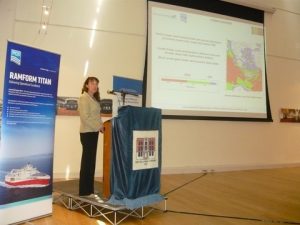 As mentioned above there was a thirty minutes televised Press Conference organised by the Greek Embassy’s Press Office and same was very simple and to the point with the Minister recapitulating on the event and answering to our very demanding questions, as well as listening to our statements, tips and suggestions. We hope we can have the script of this press conference and Q&A time in English and we will in due course present same herein. 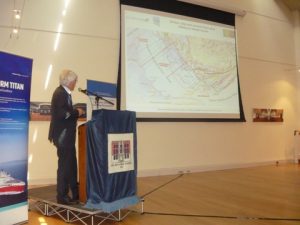 All along we have been staunch critics of the wrong doings in Greece by using Aristotelian constructive criticism and within this site you can see and read same, needless to mention our televised analysis and reports on this very issue. We have also numerous articles and views as well as reports on all energy matters given the tanker shipping, gas-carriers et al….

So let’s hope on Greece’s Mega Project; let’s work together to materialise our nation’s promising future but far from the madding crowd – you dead well know all of you what I mean! Vision is one thing, reality yet another!